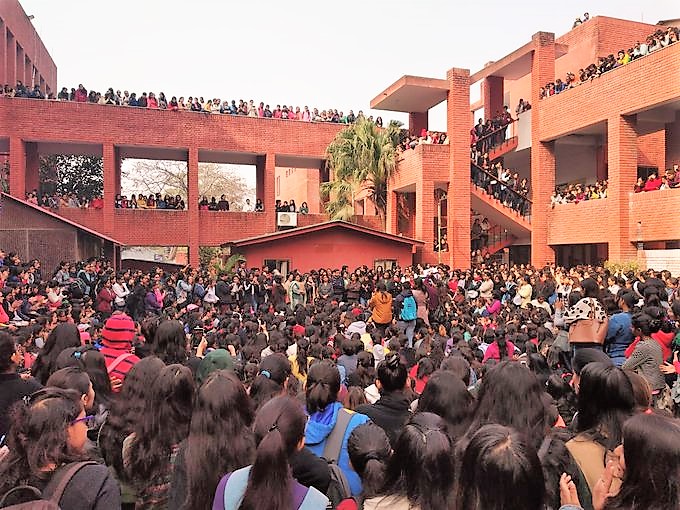 The Delhi Commission for Women (DCW) on February 10th, 2020 issued notices to Delhi Police and Gargi College administration for their alleged inaction in the sexual assault and molestation of students by a group of men who barged into the college campus during their annual fest on February 6th, 2020.

The students of the college under Delhi University also blamed the security personnel, college authorities for failing to provide them security and questioned on letting the men enter without a pass.

The incident took place during the third day of the college annual festival ‘Reverie’. A video of a group of men scaling the campus walls is currently going viral in social media.

Speaking to reporters, DCW Chief Swati Maliwal said slammed the Gargi College administration and Delhi Police on how they reacted to a serious incident like this. She also demanded detailed investigation and arrest of the accused.

Maliwal also spoke to several female students in the college about the incident. Hundreds of students held a protest outside the gate of Gargi College on February 10th, 2020.

On the other hand, Union HRD Minister Ramesh Pokhriyal said in the Lok Sabha on February 10th, 2020 that “some outsiders” had entered Gargi college during the fest and added that the college administration has been asked to look into the matter.

The students alleged that most of the girls were stuck between the men, who were passing lewd comments. They said shirtless men entered the campus in an inebriated condition, groped the girls and masturbated before them.

The students also alleged that Rapid Action Force and Delhi Police personnel were deployed close to the gate from where the men allegedly entered.

Government to soon decide on minimum age of marriage for girls:...

‘Ineligible People’ to Be Removed from Assam NRC List

Petition in SC to scrap Governor’s rule in BTC