Masaan actor Richa Chadha and Udta Punjab filmmaker Abhishek Chaubey will discuss how content is being streamed and consumed in the digital era during Mountain Echoes. 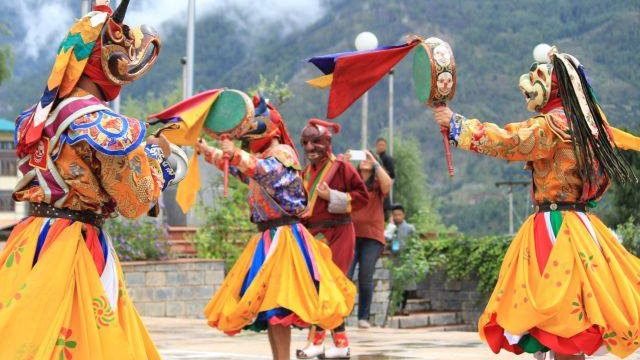 Thimphu is all set to host the 10th edition of Mountain Echoes, the festival of literature, art and culture from August 22nd, 2019. The four-day-affair will see speakers and performers sharing their stories, craft and experiences on different topics.

The theme of ‘Mountain Echoes’ this year is  ‘Many Lives, Many Stories’. It will bring thinkers, filmmakers, academicians, authors, photographers, actors and cultural icons from Bhutan, India and across the globe together on a single platform.

Bhutan being the scenic stage where the festival will come alive, Mountain Echoes will see prominent Bhutanese personalities from different spheres talking about its glorious past, vibrant present and promising future.

The sessions will put a spotlight on tales from history to the stories of contemporary times. Conversations that take us deep into Shakespeare’s repertoire of plays, stories of cities and civilizations, rivers and oceans, and biographies of historical figures as well as the modern narratives of visual communicators and entrepreneurs.

Speakers will explore contemporary dialogues ranging from ecology to travel stories that resonate deeply with individuals, stories on spirituality from the perspective of spiritual education, and sessions illustrating the art of cinematic storytelling; this year’s programming will showcase engaging tales through narratives on food, fashion, wellness and business.

As a part of the ecology capsule powered by World Wildlife Fund Bhutan, in association with Bhutan Trust Fund and Royal Society for Protection of Nature, there will be conversations on the Ruddy Shelduck, where Dr. Sherub, researcher at Ugyen Wangchuck Institute for Conservation and Environment and Dechen Dorji, representative for the World Wildlife Fund program in Bhutan follow its winter visitor ruddy shelduck’s journey through some of the most breathtaking regions in the world.

Dr Pema Choephyel and Dr Sangay will talk about the gentle Takin, Bhutan’s national animal, believed to have sprung to life when Drukpa Kunley fixed the head of a goat on the body of a cow. The panelists will discuss how technology and the reverence of the Bhutanese for the takin have shaped the country’s conservation efforts.

Indra Prasad Acharja and Jigme Tshering will discuss Water Habitats and ways to minimize the adverse impact on vulnerable species like white-bellied heron and black-necked crane and the environment, focusing on conservation, political action and education.

“I am very happy to see the Mountain Echoes Literature Festival growing in popularity every year. It has been bringing writers from India and Bhutan together along with international participants also in the beautiful and peaceful surroundings of the mountains of Bhutan,” said V Namgyel, Ambassador Major General.

“The Festival has promoted India-Bhutan friendship through intellectual and cultural interaction, adding an important dimension to the close and exemplary relations between our two countries. I wish the 10th Edition of Mountain Echoes this year great success” added V Namgyel.

The first day will see speakers like Neil MacGregor, former director of the National Gallery, London and author of A History of the world in 100 objects and Shakespeare’s Restless World. Dr Pema Choephyel and Dr Sangay will talk about the gentle Takin, Bhutan’s national animal, believed to have sprung to life when Drukpa Kunley fixed the head of a goat on the body of a cow.

Stories of entrepreneurship will take centre stage through successful entrepreneurs like Kinley Wangchuk (Ganchu), Namgyel Dorji and Pema Choden Tenzin, who will discuss the challenges and joys of striking your one’s own path and building businesses from the ground up. While Toby Walsh, the rock star of Australia’s digital revolution, will break down the fear against Artificial Intelligence.

Masaan actor Richa Chadha and Udta Punjab filmmaker Abhishek Chaubey will discuss how content is being streamed and consumed in the digital era.

This year’s theme ‘Many Lives, Many Stories’ lends to the dialogue of storytelling and its many forms. From storytelling in history, the definitions of pre-history, proto-history, history and our prejudice for the written word; to workshops by Jason Quinn on writing for a graphic novel, Aamir Wani on storytelling through visuals and Neelesh Misra on the thought process of creating a story; the festival will emphasize the power of storytelling through different mediums.

Sessions will also look at modern forms of visual storytelling and the lives of contemporary storytellers. Deki Wangmo, Bhutan’s supermodel, Karma Lhari Wangchuk, internationally recognized first fashion blogger from Bhutan and Ugen Choden, the first Program Director of the Bhutan Foundation will talk about how the Bhutan fashion industry while being open to the ideas from the outside world has also retained its unique identity.

Photographer-filmmaker Aamir Wani, curator Jono Lineen and travel writer Shivya Nath will talk about viewing the world through their trusty cameras that never let them down. All avid travellers, they talk about how images are a universal way of telling stories and communicating with people, and about sharing their stories through Instagram.

Speaking about this year’s edition, Festival Co-Director Pramod KG said, “The tenth edition of ME is a testament to the staying power of independent platforms that privilege the written word, the spoken thought and the many tongues that articulate our stories.”

In a session on the legacy of the Wangchuck Dynasty, Lopen Lungtaen Gyatso, President of the College of Language and Culture Studies and the Pro-Vice-Chancellor of the Royal University of Bhutan and Dasho Yankee will engage in an insightful conversation with Dasho Karma Tshiteem on the contribution of the dynasty in shaping up Bhutan. By taking into account its citizens’ happiness and peace, Bhutan measures its progress in Gross National Happiness and not Gross Domestic Product. Speakers Tashi Pelyang and Vivi Tshering will talk about the DeSuups Integrated Training Programme which is built upon the spirit of volunteerism and the positive influence of ethics and values of community service, integrity and civic responsibility.

Neil MacGregor and Dasho Tshering Tobgay will follow Shakespeare on his journey from 16th/17th-century England to 21st-century Bhutan.