The MLAs said that every year, the Sikkimese community celebrate Pang Lhabsol, recognizing the mountain deity as a protector of Sikkim 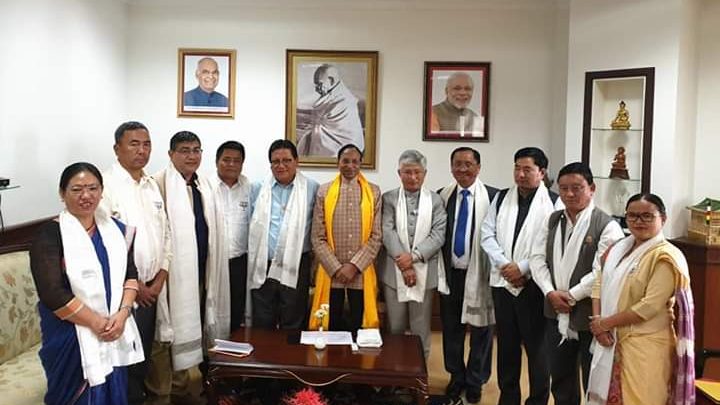 The 10 MLAs from Sikkim Democratic Front (SDF) who recently joined the Bharatiya Janata Party (BJP) met Sikkim Governor Ganga Prasad on August 24th, 2019 and submitted a memorandum urging the Centre to rethink the decision to permit climbing on Mount Kanchenjunga (Khangchendzonga in Sikkim).

The MLAs told the Governor that the Ministry of Home Affairs notification on opening 137 new Himalaya peaks including Mt Kanchenjunga has not been received well by the Sikkimese people. “There is a continuous backlash in the state following the announcement. All the mountains of the state, especially the Kanchenjunga are regarded as deeply sacred by the Sikkimese people. We believe that a deity resides on the peak,” the MLAs mentioned in the memorandum.

The MLAs mentioned that every year, the Sikkimese community celebrate Pang Lhabsol, recognizing the mountain deity as a protector of Sikkim. The legislators stated that the Mt Kanchenjunga peak has never been open for mountaineering from the Indian side due to the “deep respect for the religious sentiments”.

“We understand that the notification comes with the intention of enhancing tourism in the state and following employment opportunities to grow in the region, however, religious beliefs far outweigh the commercial aspect,” the Members of the Legislative Assembly, Sikkim BJP told the Governor.

The site being a religious one is also protected by the ‘Places of Worship (Special Provision) Act, 1991. The MLAs expressed concern that the opening of the peak commercially could lead to the creation and collection of waste as evident on Mt Everest.

“The decision would boost the growth in the tourism sector but the matter interferes with the religious freedoms and sentiments of the people. The people of Sikkim would appreciate it if the sanctity of the peak is maintained and climbing on Mt Kanchenjunga is not allowed,” the MLAs told the Governor.

Bhutia also submitted a memorandum to Union Sports Minister Kiren Rijiju on August 23rd, 2019 on the recent MHA notification. Bhutia mentioned in the memorandum that the Mt Kanchenjunga is a sacred peak for the people of Sikkim and is worshipped as the guardian deity and protector of the people of the state.