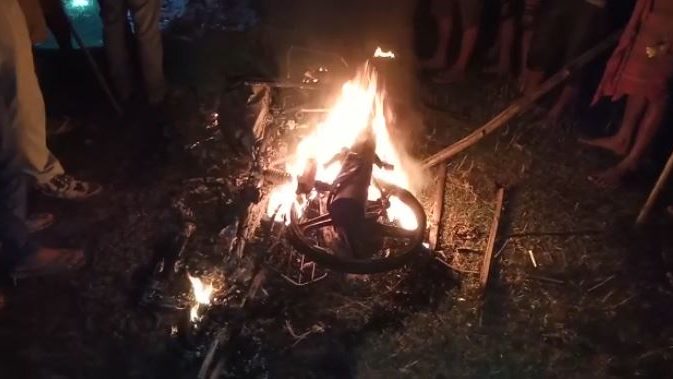 Tension gripped Longjap village under Kachua Police Station of Assam’s Nagaon district over the slaughtering of a cow. The villager is mainly dominated by people belonging to the Nepali community.

As per information available, two Muslim boys, identified as Shahjahan and Jasamuddin were detained by a group of people for allegedly slaughtering a cow within the territory of Longjap village. The enraged villagers also set their motorcycle on fire. The incident took place on the night of October 1st, 2019.

“The Nepali people of the area have alleged that two Muslim boys have slaughtered a cow inside their village. But as per the statement given by the boys, they bought the cow but it died on the way. Since, they couldn’t carry the dead cattle, they slaughtered it to eat among themselves,” said Shankar Brata Raimedhi, Nagaon Superintendent of Police while speaking to Time8.

“The villagers detained the two boys and vandalized their vehicle. As soon as we received the information, we rescued the duo and brought them to the police station. The situation is under control,” added Raimedhi.

As per the latest information, an FIR has been lodged in the Kachua Police Station on October 2nd, 2019 and security personnel has been deployed to tackle any law and order situation in the village.

It may be mentioned, cow slaughter, governed by the Assam Cattle Preservation Act of 1950, is not prohibited in Assam.

Bornali Gogoi joined the IAF on May 27, 1996, as a pilot officer. Later, she was promoted to flying officer and flying lieutenant
Read more

The team was led by Manash Barooah and two peaks were selected for the expedition – Mt Pologonka (6370 m) and a unnamed virgin peak (6240 m).
Read more