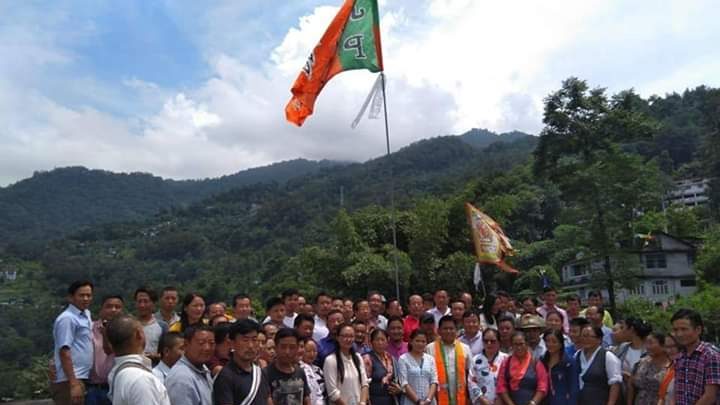 The 10 MLAs from Sikkim Democratic Front (SDF) who recently joined the Bharatiya Janata Party (BJP) launched the party’s extensive membership drive on August 23rd, 2019 in their respective constituencies in Sikkim.

The state BJP informed in a communique that the MLAs hoisted the BJP’s flag at the residence of Pintso Namgyal Lepcha located at Pentok in Mangan North Sikkim. Lepcha is the MLA of Dzongu constituency in Sikkim. After the flag hoisting ceremony, the MLAs started the membership drive.

The communique further stated that the state BJP will organise a grand programme at the party office on August 26th, 2019 to welcome all the legislators who have recently joined the party.

At the programme, the organizational expansion of the party will be promoted by introducing and coordinating with all the leaders and activists of the party.

It needs to be mentioned here that the 10 MLAs from SDF joined the saffron party on August 13th, 2019 in New Delhi. This step has dwindled the position of Pawan Kumar Chamling, founder of SDF.

Sikkim was the only state in the entire Northeast region where the saffron party was not in power and with this step, the strength of SDF in the Sikkim Assembly falls to just five members.