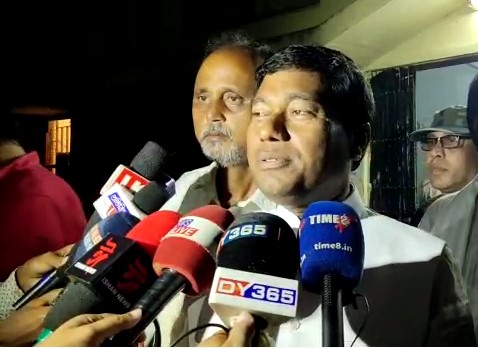 Union Minister of State for Food Processing and Dibrugarh MP, Rameswar Teli on October 29th, 2019 fell sick and had to be admitted to hospital due to gas and acidity related problems.

He was addressing a ‘Gandhi Sankalp Yatra’ programme in Digboi Legislative Constituency when he complained of discomfort and dizziness. His colleagues and party workers present at the programme rushed him to Tinsukia Civil Hospital.

However, after being administered medicines by the doctors, Teli is back on his feet. Speaking to the media persons outside the hospital, Teli said, “We had decided to walk 14 kms from Digboi’s Tingrai to Hapjan. After completing 9 kms of the yatra, I addressed a gathering for half an hour. I started to feel uneasy while I was addressing the crowd.”

He added, “Today is Bhai Phonta and my Gorkha brothers and sisters had offered me sel roti and chutney. After finish the food, I started to walk again but my head started to spin. I felt weak and vomited. My colleagues then brought me to the hospital. The doctors told me it’s due to gas.”

The Union Minister shared that though he doesn’t consume milk, today he ate “three rotis, xaak (leafy vegetable) and a glass of milk. “The doctors gave me medication to treat my gastric problems. I am feeling much better now. I will address another ‘Gandhi Sankalp Yatra’ programme in Margherita tomorrow.”

The Bharatiya Janata Party launched a nationwide ‘Gandhi Sankalp Yatra’ on October 2nd, 2019 to mark 150th birth anniversary of Mahatma Gandhi. As part of the campaign, the party workers ill travel 150 kilometres to spread the values of Gandhiji – Swadesh, Swadharma and Swadeshi – to the masses.