The disputes should be settled through peace talks, Himanta at Fourth NEDA Conclave in Guwahati 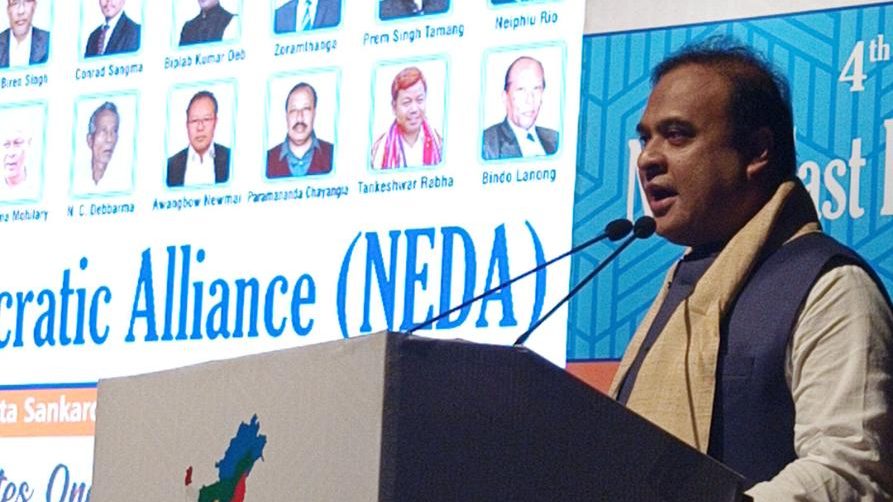 The Convenor of the North East Democratic Alliance(NEDA) and State Finance Minister, Himanta Biswa Sarma said that the inter-state border disputes of the Northeast(NE) region will be settled at top priority.

“North East is so incredibly full of potential, PM Narendra Modi and NEDA chief Amit Shah want NE to become India’s resource. The border issues of the region will be settled soon. The disputes will have to be settled through peace talks”, said Himanta Biswa Sarma while addressing the 4th NEDA Conclave. Chaired by Amit Shah, the Fourth NEDA Conclave was held at the Srimanta Sankardev International Auditorium in Guwahati on September 9th, 2019.

“This is the first time in history that all the eight Chief Ministers of the Northeast are Non-Congress leaders. 19 out of 25 MPs are NEDA members. This is a golden moment of my political life. I pledge to remain united in the coming times. NEDA is a platform of goodwill”, added the Minister.

He also said that the NE region will have to be freed from intoxicants and drugs and they have plans to set up a cultural museum for NE in Delhi.

Speaking at the Conclave, Meghalya Chief Minister said, “Northeast never got the centre’s attention. Today the home minister knows everyone leader personally. We were never respected but today were are respected. We northeastern people are emotional people. We derive happiness from small things,”

Expressing apprehension on the contentious Citizenship Amendment Bill and NRC, Conrad added, ” The Bill has affected the region and i am personally scared. Will the 19 Lakh people excluded from Assam NRC deported to Meghalaya? Will people from Bangladesh be given citizenship here? I urge centre to hold consultations and stakeholders to arrive at any decision for the region”.

Mizoram Chief Minister Zoramthanga also speaking at the occassion said that there was a time when all the NE states were once governed by the Congress but the present scenerio has a complete different picture.

Tripura Chief Minister Biplab Kumar Deb said that NEDA is a great initiative it will take the fortunes of the region to newer heights. “I aspire that we all continue to work together for many years to come,” Deb added.

Neiphiu Rio who was also present at the meeting asserted, “The NE region so far has made great progress and the idea of NEDA is timely. We all must work unitedly to make the region a vibrant one”.

“Way back in 2016 when NEDA was formed we had only 3 CMs; in 3 years, the figure has more than doubled. In Narendra Modi, we’ve got a PM who’s changed the destiny of India and NorthEast,” Arunachal Pradesh CM Pema Khandu said.

Speaking in the same line Manipur CM N Biren Singh added that the change in outlook from Look East to Act East, as per vision of Narendra Modi, has been the motto of NEDA which has helped teh region achieve its long-pending dreams of development.

Sikkim CM Prem Singh Tamang said that Sikkim is committed to ensuring peace and prosperity of the North East. NEDA should become a vital link to progress in the region.