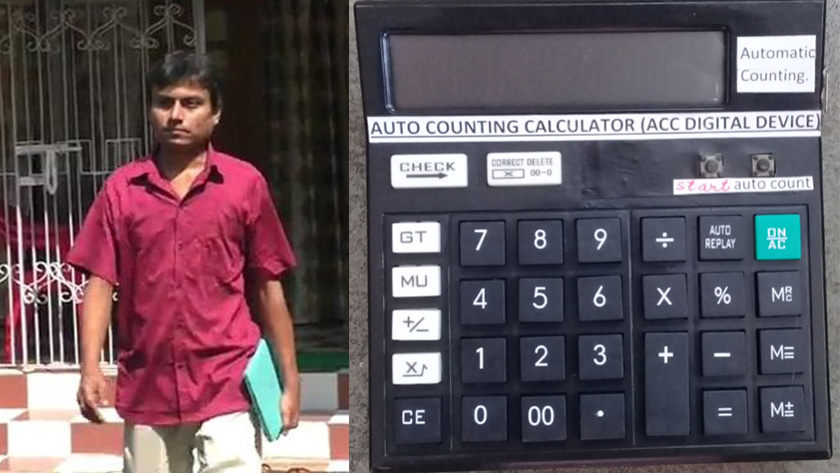 After a 14-year-long experiment and hard work, a 30-year-old youth from North bank of the Brahmaputra in Guwahati brought laurels to the state as well as to the nation by winning an award in an innovation contest organised by the National Aeronautics and Space Administration (NASA). The contest is Create the Future Design.

Speaking to Time8 over the , Champak Bora said, “It was September 29th or 30th this year, I got to know about the result of the contest. I found my name the list. I was too much happy at that time which I cannot express in words now.”

The idea to create the Automatic Counting Device was conceived in 2005 by his elder brother Troilokya Bora. “My brother suggested me to try creating the device. I worked in the project continuously since then and completed the device by the end of 2018,” Champak said.

Champak, who is working with the Assam government as a Computer Assistant, said, “Initially, I was leading with 187 votes. But unfortunately, Victor Manuel Castano from Colombia crossed me and occupied the first position by securing 227 votes.”

Talking about the device, Champak said, “A new look has been given to the general calculator. Automatic calculation can be done in this calculator. This digital device can be used in many places such as schools, colleges, temples, mosques, churches, railway stations, airports etc. It can also be used to count how much production is going on in a , how many boxes are available.”

The former Cotton University student secured the second position among 10 finalists in the contest organised by the NASA. The Create the Future Design contest was launched in 2002 by the publishers of Tech Briefs magazine of NASA to help stimulate and reward engineering innovation.

In 2005, Champak received an award from the then Indian president APJ Abdul Kalam for his creation ‘Audio Signal Transmit System’ while in 2006, the then Gujarat Chief Minister and current Prime Minister of India Narendra Modi lauded him for his ‘Solar Project’.

City restaurants not going to be closed: Hospitality Worker’s Association

The clarification came amidst reports of Guwahati restaurants likely to be closed for two days doing rounds on the internet.
Read more

The wildlife authorities on January 5 confirmed avian influenza (H5N1) as the cause and has also asked other states and UTs to keep a vigil on any unusual mortality amongst birds.
Read more