On Festival Of Feasting, KMSS Stages Hunger-Strike In Sarthebari

Akhil Gogoi was remanded to 14-day judicial custody by a special NIA Court on January 10, 2020 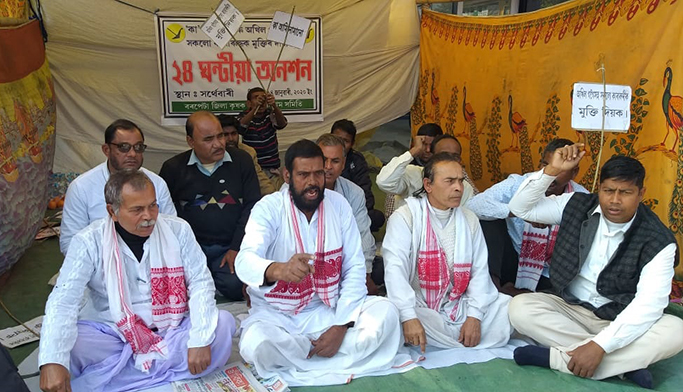 Breaking the age-old tradition of the Bhogali Bihu, a festival of feasting, the Krishak Mukti Sangram Samiti (KMSS) activists on January 14th, 2020, staged a hunger strike in protest against the contentious Citizenship Amendment Act in Sarthebari in Barpeta.

The activists demanded immediate withdrawal of the act and release of the leaders of the organisation along with the KMSS chief Akhil Gogoi.

The hunger strike, which was started from 11 am today, will end on 11 am tomorrow. Several organisations including Sarukhetri Citizens’ Forum extended their support to the protest. The protestors chanted slogans against the ruling Bharatiya Janata Party.

It is pertinent to be mentioned that on January 10th, 2020, the Government of India issued the gazette notification for the implementation of the Act. The Act seeks to grant Indian citizenship to the people belonging to Hindu, Sikh, Jain, Christian, Buddhist and Parsi, who have become victims of religious persecution in Afghanistan, Pakistan and Bangladesh and have entered into India on or before 31st, December 2014 and lived without any documentation.

On January 10th, 2020 the KMSS chief was remanded to another 14-day judicial custody by a special NIA Court in Guwahati. He was arrested in Jorhat amid protests over the Act on December 12th, 2019. The Guwahati police on the following day registered a suo-moto case against Gogoi. Later, on December 14th, 2019, the state government handed over the case to the NIA.

Gogoi was sent to 10-day NIA custody on December 17th, 2019 by a special court in Guwahati and was taken to NIA Headquarters in New Delhi. He has been accused of having nexus with Maoist groups. On December 26th, 2019, an NIA court has earlier sent Gogoi to judicial custody for 14 days.

Assam has witnessed massive protests in different forms since December 11th, 2019, when the Bill was passed by the parliament. Spearheaded by the All Assam Students’ Union, the agitation has gained support from all walks of people including the teachers’ fraternity, students’ fraternity and the artistes’ fraternity.

Following the protests in the state, which spread to other parts of the country, the government had imposed a curfew and suspended internet services in 10 districts for nine days.