One Month On, Protests Continue Against CAA In Assam

Four people have been killed in police firing, while an oil tanker driver was charred to death when his vehicle was set on fire in Orang 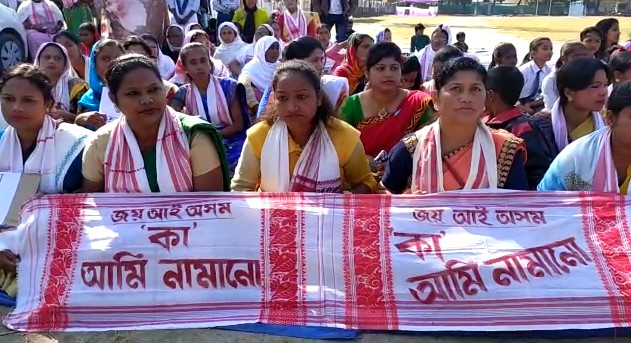 The protests against the controversial Citizenship Amendment Act (CAA) completed one month in Assam, however, the rage refuses to die.

The protests over the CAA began in the state in the first week of December 2019, much before the rest of the country. Ever since the Citizenship Amendment Bill was passed by the Rajya Sabha on December 11th, 2019, every day, a well-attended anti-CAA rally or demonstration is witnessed in almost all the districts of the state.

Amid widespread protests in Assam and other parts of the country, the Union Home Ministry issued a notification stating that the provisions of the Act will come into force from January 10th, 2020. However, the Centre is yet to frame rules for the Act.

The students of several institutions including Cotton University (CU) burnt effigies of Prime Minister Narendra Modi and Shah in Guwahati after the CAA officially came into effect. The students of CU also took out torchlight rally in protest against the Act on January 11th, 2020.

Following the Home Ministry’s notification, several students’ bodies and civil organisations came out on streets of the state and shouted slogans against the Act. AASU chief advisor Samujjal Kumar Bhattacharya said that the people of Assam will not accept it at any cost.

On the other hand, an anti-CAA agitation took a violent turn in Lakhimpur on January 11th, 2020 after protesters clashed with police personnel.

Meanwhile, the activists of the Asom Jatiyatabadi Yuba Chatra Parishad marching from Tinsukia to gherao the Janata Bhawan in Dispur to protest the CAA were stopped and detained at Khanapara point on January 11th, 2020 as a preventive measure.

After the Rajya Sabha passed the Bill on December 11th, 2019, violent protests erupted in the state forcing the administration to impose curfew and ban the internet.

In Assam, rail stations, panchayat office, a post office, a bank, a bus terminus, shops, several vehicles and other public properties have been either set ablaze or ransacked during the anti-CAA protests.

The streets of Assam, specially the Guwahati-Shillong Road, had turned into a veritable battle zone littered with burnt tyres, logs, stones, rubber pellets and teargas shells as seething protesters, mostly students, descended on the streets opposing the citizenship act.

Four people have been killed in police firing, while an oil tanker driver was charred to death when his vehicle was set on fire in Orang.