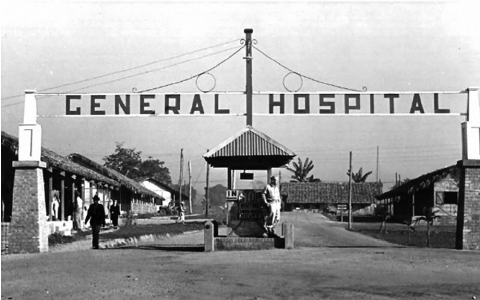 American War General Joseph Warren Stilwell who commanded the allied troops from foot hills of Patkai mountain range of NEFA (Present Arunachal Pradesh) constructed a 1079 KM mountain road from Lekhapani of present Tinsukia district to the Kunming City of South China. All war casualties of Indo – Burma War front were brought to the wards of military hospital temporarily set up at Barbari Race Course in Dibrugarh.

Subsequently, the War General Joseph Warren Stilwell upgraded the infrastructure of this hospital to the standard of 28th I. G. Hospital of New York City.

It seems that Dr. Golap Chandra Bezbarua was the first Assamese to sail to England to learn Western Allopathic Medicine at Royal College of Physician at Edinburgh. However long after his sojourn to England and South America, in the year 1870, British National, a retired Brigadier of British Army Dr. John Berry White joined as Civil Surgeon in undivided Lakhimpur district at Dibrugarh Head Quarter, and established first Medical School at Dibrugarh in 1900, which is known as first medical school of Asia, with an affiliation to train, teach and recognise the doctors with Diploma as Licensed Medical Practitioner (LMP).

At that time Dibrugarh was known as Medical Town of India and it was ranked as 7th Medical City in Continent of Asia. In the year 1910 the Berry White Medical School imported two X-ray machines from England, which were the first in India, and opened the India’s first Radiology Department amidst all medical institution of the nation. As soon as this Garrison Hospital was converted and recognised too, as Medical College, dedicated clinical persons with extra ordinary qualities and professional backgrounds, were recruited and brought from different parts of undivided India, even from then, West Pakistan, to teach clinical and para clinical subjects at Dibrugarh. Few names of those pioneer teachers of AMCH were Prof. G. D. Kapoor[1949 (Surgery)], Prof. P. N. Taneja, Prof. N. Gupta, Prof. B. H. P. Pai (Medicine), Prof. K. S. Grewal (Pharmacology), Prof. P. C. Nambiar (Surgery), Prof. R. G. Krishnan (O&G) Prof. A. E. Sundersan and Prof. N. C. Dey (Pathology), Prof. R. Bhattacharyya. Dr. H.C. Baruah(1947-48), Dr. R. Labhya(1952-53), Dr. B. N. Banerjee (1956-59). Most of these medical giants of those days qualified their MBBS Degree either from Calcutta Medical College or different medical colleges of Lahore of then West Pakistan.

The grim reality for today’s AMC is little pathetic, but during 50’s and 60’s, this Assam Medical College was known as an epicenter of learning for modern medicine and surgery in Eastern India, because of its old scintillating past. It was an epitome of noble act to serve best to the humanity. Unfortunately, as it grows with the pace of time and tides, much of its early fame is, as on now, bluntly eroded; few corners of this hospital campus became a coop for minting unfair money. Few peoples of medical fraternity, Guwahati Medical College Centric bureaucratic decision, (specially in 80’s and 90’s) and local political unfair patronage – corruption, nepotism were the real cause for such moral degradation of medical ethics inside the glorious hospital campus in the period of last two decades.

Now questions comes up how Assam Medical College, at Dibrugarh was able to earn the world wide recognition as centuries old temple of learning medical science from early fifties to mid seventies of last century.

This question have no definite and straight answer, but it can be much presumed that, early teachers and administrators of Assam Medical College were trained and taught at orthodox medical schools situated at either in London, Edinburgh or Glasgow. Those medical institutions standing on the soil of England, are acclaimed worldwide for maintaining stringent medical ethics as per prescribed by the Oath of Hippocratic, mentioned in ancient Greek Medical text.

The Oath of Hippocratic, which every physician upholds to be sacred is:- “I swear by Apollo Physician and Asclepius and Hygieia and Panacea and all gods and goddesses, making them my witnesses, that I will fulfil according to my ability and judgement, this oath and this covenant.

To hold him who was taught me this art as equal to my parents and to live my life in partnership with him a share of mine, and to regard his offspring as equal to my brothers in male lineage and to teach them this art-if they desire to learn it- without fee and covenant; to give a share of precept and oral instruction and all the other learning to my sons and to the sons of him who has instructed me and to pupils who have signed the covenant and have taken an oath according to the medical law, but no one else.

I will not use the knife, not even on sufferers from stone, but will withdraw in favour of such men as are engaged in this work. Whatever houses I may visit, I will come for the benefit of the sick, remaining free of all intentional injustice, of all mischief and in particular of sexual relations with both female and male persons, be they free or slave.”

Many of the early luminaries and clinicians per excellence of Assam Medical College were either English or Scottish groomed and tutored under the nose of brilliant British scholars. All those pioneers sailed to England for higher leaning of medicine and general surgery. Most of the luminaries returned to their native land after obtaining higher FRCS, FRCP degree in England.

Persons like, Dr. Lakhi Prasad Dutta obtained PhD from Sheffield University both in Pathology and Microbiology. Dr. Siba Prasasd Baruah was known as philanthropist than a mere physician. He broke new ground as razor edged orthopedician, acclaimed his fame for superb professional acuminous trait across the nation.

Since from the period of early 50’s to late 80s of last century, one could have witness a strong family bonding among the teachers and students of Assam Medical College. As result of which, the abovementioned giant predecessors of fifties and sixties, were much successful to create prototype of their immediate generation of teachers and doctors to carry out successfully the legacies of their alma mater to rule and administer both college and hospital till late eighties, at least in a manner they had set in.

Bringing laurel to fame to Assam as well as to the North-east Dr. Binapani Doley, the first United Kingdom turned lady doctor from Mishing Community was also the medical graduate from Assam Medical College. She was born on 17th March 1947, died on 5th June 2020, at her own was the residence, at Commissioner Road on the bank of Bhogdoi River in Jorhat. Renown oncologist of India, former Professor of Department of Oncology of Tata memorial Hospital and Senior Oncologist of Prince Ali Khan Hospital, Mumbai, Dr. Tapan Saikia, in his last tribute to Late Dr. Doley said that Dr. Beena Doley was the last medical graduate from Assam Medical College, to sail to England putting a complete full stop on the three-decades-long trend of sojourn to England or Scotland for the purpose of higher studies in medicine and surgery. Dr. Tapan Saikia, in his opinion further says that, after 1975, the official procedure for going abroad became critical and in subsequent periods, it was not easy to go to England for obtaining a higher Fellow degree from Royal Colleges in Edinburgh, Glasgow and also, as well as in London.

Late Bongshidhar Doley, the father of Dr. Beenapani Doley, real inspiration for the unparallel success of her daughter. While Dr. Beena Doley was about to leave for England, at that time, her father was counting his last days, because of serious chronic illness. However looking at the serious gradual deterioration of health of her father, she proposed to scrap his academic tour to England. However the knowing, the sorrowful mind of his daughter, the ailing father Bongshidhar Doley, called her daughter Beena, to his death bed and warned not to cancel her England tour, even because of his sudden death in immediate future. Finally destiny put Beena Doley in her ordeal. Her father died just three days, before her planned departure for England. But “she had a promise to keep”. She left for London on the third day of the death of her father.

Dr. Beena Doley, went to England for higher studies on January 1978. In London she finished her DPM, Diploma in Neurology on the year 1981 and completed her degree as Member of Royal College of Psychiatry (MRCPsy) from the Royal College Psychiatry of London in 1982. She returned to India in December 1983, after completing her higher education in England.

Dr. Beenapani Doley was an Assamese by heart, she singlehandedly tried to showcase the beauty and splendor of traditional Assamese dress and costumes, in the remote Scottish highland or in busy streets of London during her 6 (six) long years of stay in England. Even in her days in National Hospital at Queen’s Square at London, she regularly wore hand woven pristine white “Mekhela Chador”, specially woven by her own mother late Champawati Doley in her Jorhat home. This was one of the simplest examples of her nationalistic spirit as proud Assamese in far across the miles from home land on the soil of England. “Moi Englandot mekhela chador pindhi furisilu”. Aamar Nizor Kapur Nohoi Janu ?” (I wore Mekhela Chador in England, is it not our own dress ?)-once she told Ms. Golapi Tanti, her close aide, at Milan Nagar, Dibrugarh, just after returning from England.

[Special thanks to Dr. Mriganka Shekhar Chaliha, (Senior Faculty) for supporting me with the names of students, teachers belong to first few batches of Assam Medical College, Dibrugarh]

A new light fell into the case of Ringhkhang, the 15-year-old girl from Baksa, who was allegedly murdered on September 13 in her own house
Read more

IN PICS: Kaziranga National Park Returns to Normal after Flood