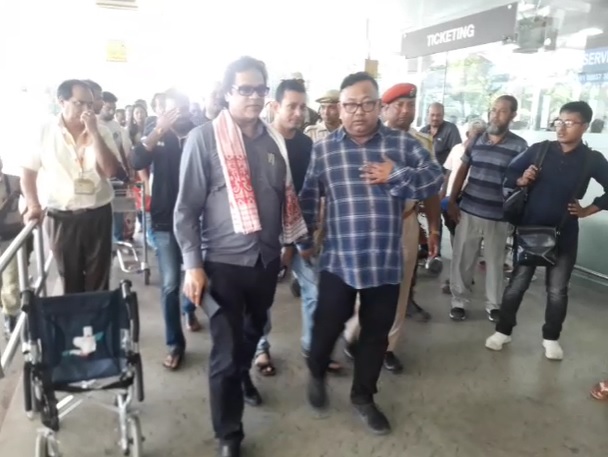 Outgoing National Register of Citizens (NRC) coordinator, Prateek Hajela after being deputed in Assam for 23 years bade farewell to the state and left for Madhya Pradesh from the Lokpriya Gopinath Bordoloi International Airport on November 12th, 2019.

Well-wishers, family members gathered at the airport to see off the 1995 batch IAS officer of the Assam-Meghalaya cadre and greeted the civil servant.

“I am on deputation to Madhya Pradesh will be back very soon. Assam is very close to my heart as I have spent 23 years of my life here. I started my work life from this state and had a great experience. Thankful to all the people,” Hajela said while addressing the media.

On being asked about the NRC process, he added, “NRC was a process which dealt with the immigration problem which has been a sensitive issue. It has been finally published and I am quite confident about the work performed,” he added.

It may be recalled, a Supreme Court bench of CJI Ranjan Gogoi and Justices SA Bobde and Rohinton Nariman on October 18th, 2019 ordered the inter-cadre transfer of Hajela to Madhya Pradesh within seven days.

The top court, however, didn’t disclose the reason behind his transfer order. He has been subject to severe criticism from political and apolitical organizations, who were unhappy with the exclusion figure in the NRC list. The opposition raising their concern had urged that the state government should not release the state coordinator until his replacement is appointed.

The Assam government on November 9th, 2019 appointed Hitesh Dev Sarma as the new Assam NRC Coordinator. He was last posted as the Secretary, Urban Development and Finance Department, Assam.

The NRC exercise in Assam was led by Hajela as a state coordinator since 2013.