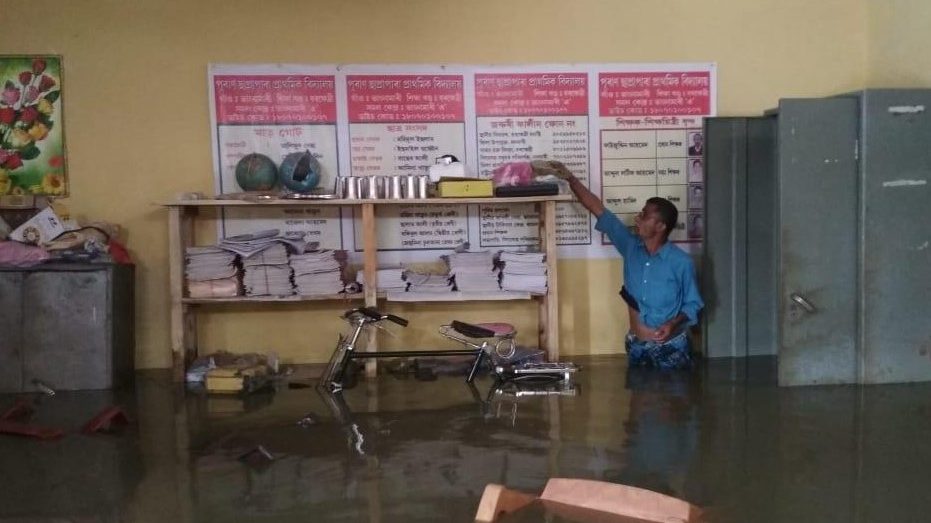 Guwahati: Floods which are a common phenomenon in Assam has marooned a total of 28 out of 33  districts of the state and the death toll increased to 36 persons, officials informed.

As of July 18th, 2019, 2,25,737 people are taking shelter in 689 relief camps and 939 houses have been fully damaged while 2,857 houses have been partially damaged. As many as 391 relief distribution centres have been opened to distribute rice, dal, salt, oil, tarpaulin, cattle feed, drinking water, baby food, food kit for pregnant/ lactating mother, candles and other essential items to the affected people.

Meanwhile, in the Kaziranga National Park, the water level has receded to an approx of 105 centimetres, according to the flood bulletin. A total of 98 camps have been inundated and nine camps have been shifted and 83 wildlife deaths have been reported since July 13th, 2019 till July 18th, 2019.

Here are the top 12 developments:

6. Another staffer of the Goalpara District Administration office, Prabir Debnath decided to donate his monthly salary for the flood relief and this was informed by Goalpara Deputy Commissioner Varnali Deka on Facebook on July 18th, 2019.

8. In the wake of massive trolls that were circulating on social media against international star icon Priyanka Chopra for her ‘late’ tweet over Assam floods, Assam Finance Minister Himanta Biswa Sarma tweeted that the actress is no longer the State Tourism Brand Ambassador as her contract has expired.

10. Two school-going girls were found to have drowned in the swollen Brahmaputra in Dhubri’s Bilasipara area on July 19th, 2019.

11. An undertrial rape accused identified as Hajifur Rahman swam to freedom in the wee hours of July 17th, 2019, just a day after he along with 408 Dhubri jail inmates were shifted to the Dhubri Girls’ College. Hajifur broke open the grill of a window in the college and swam into the floodwaters and escaped.

12. An Army helicopter on flood rescue operation made an emergency landing in Nalbari on July 18th, 2019 with three persons on board after it developed a snag.