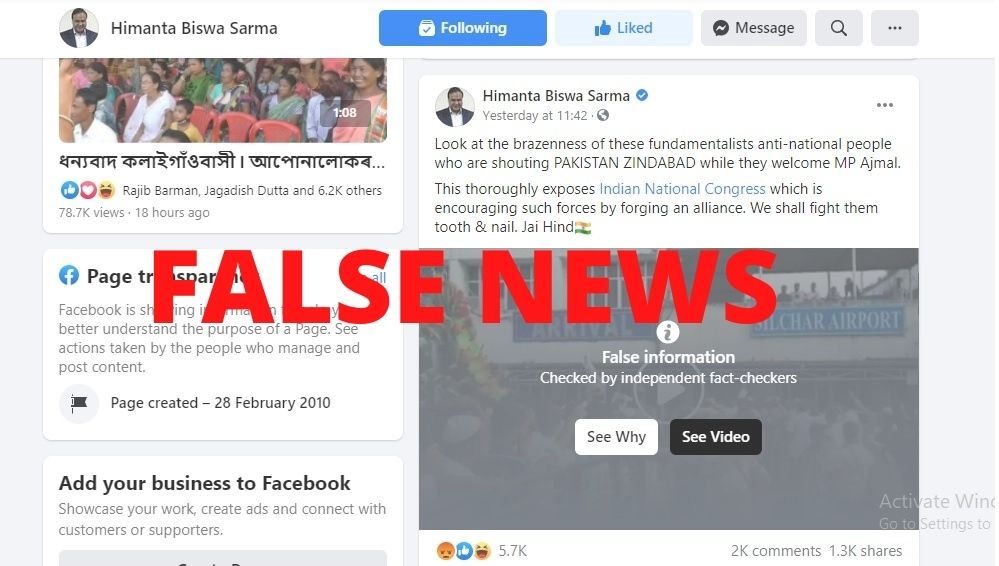 The independent fact-checkers said that the information has no basis in fact.

In the viral video, hundreds of AIUDF supporters who were waiting outside Silchar airport in Assam were seen welcoming the party chief and perfume baron Badruddin Ajmal on Thursday. In the video, some of the supporters were allegedly heard shouting ‘Pakistan Zindabad’.

Immediately, Assam finance minister Himanta Biswa Sarma took it to his Facebook page and Twitter handle and posted the video saying the AIUDF supporters as anti-nationals. He wrote: “Look at the brazenness of these fundamentalists anti-national people who are shouting PAKISTAN ZINDABAD while they welcome MP @BadruddinAjmal.”

However, hours after the video had triggered a fresh controversy in the state forcing the registering of several FIRs against the AIUDF leader and supporters, the independent fact-checkers labeled the video posted by Sarma as ‘Fake’.

The fact-checking team said, “BOOM analysed several videos uploaded on social media from the same event and found that the crowd shouted Aziz bhai and Aziz Khan zindabad to welcome AIUDF MLA Aziz Khan. Some of the crowded party workers also shouted Ajmal bhai zindabad and AIUDF zindabad to show support to Badruddin Ajmal and the party. None of the videos had the ‘Pakistan Zindabad’ slogans being raised.”

“We found a Facebook video uploaded by a supporter and found the same event shot from a different angle where after the 55-second mark, one can hear various sections of the crowd shouting three slogans – ‘Aziz bhai zindabad’, ‘Ajmal bhai zindabad’ and AIUDF zindabad’,” said the independent fact-checkers.

Earlier, AIUDF too rubbished the allegations and alleged that the supporters were shouting ‘Aziz Khan Zindabad’ and minister like Sarma was circulating a fake video only to create false propaganda.