Protesters in the state showcased a vegetable museum where they displayed various vegetables and labelled their prices. 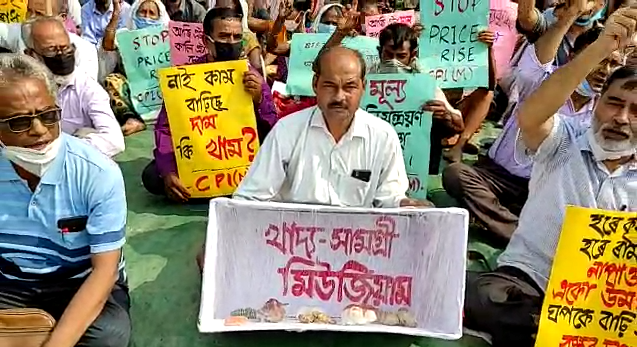 Guwahati: After the controversy of the proposed miya museum reflecting the culture of ‘Char-Chapori’ in Srimanta Sankardev Kalakshetra, a vegetable museum has taken place in the streets of Assam.

Protesting against the skyrocketing prices of the essential commodities, protesters in the state showcased a vegetable museum where they displayed various vegetables and labelled their prices.

A new flash point has sparked in the state over the recent hike and people took the streets to demand the price control.

The people and local bodies in various places in the state were seen protesting against the exorbitant price hike of all essential commodities including onions, potatoes and other vegetables and demanded price control.

The Communist Party of India (M) Kamrup District Metropolitan Committee on Wednesday staged a protest rally against the hike.

Members of the leftist political party chanted slogans with placards in their hands at the Guwahati club in city.

The other day, members of All Assam Student Union (AASU) were seen protesting with garlands made of potatoes, onions, and other vegetables, saying that the inability to control prices was a failure of the state government.

Over the past few weeks, the price of common foods like rice, dal, oil and some vegetable have risen in the market and people are facing difficulties to meet their daily needs, especially with the ongoing COVID-19 pandemic.

The recent hike in prices of vegetables and edible oils has hit the consumers hard. The coronavirus outbreak and the subsequent lockdown had already dismantled the economy and now this current inflation of food items in and around Guwahati have further burdened the citizens and their already stressed wallets.