Speaking of the fourth stage of the lockdown, the Prime Minister said that the next phase will be implemented with new norms 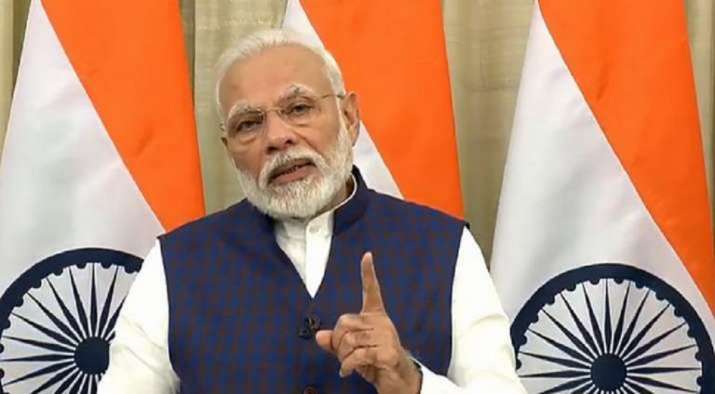 Recalling those who have died battling the pandemic, Prime Minister Narendra Modi on Tuesday said that the crisis that has emerged due to COVID-19 is unprecedented, but in this battle, we not only need to protect ourselves but also have to keep moving forward.

Talking about the pre and post COVID-19 worlds, Prime Minister observed that in order to fulfill the dream of making the 21st century India’s, the way forward is through ensuring that the country becomes self-reliant. Talking about turning a crisis into an opportunity, he gave the example of PPE kits N-95 masks, whose production in India has gone up from almost being negligible to 2 lakh each, on a daily basis.

Prime Minister remarked that the definition of self-reliance has undergone a change in the globalized world and clarified that when the country talks about self-reliance, it is different from being self-centred. He said that India’s culture considers the world as one family, and progress in India is part of, and also contributes to, progress in the whole world.  He noted that the world trusts that India has a lot to contribute towards the development of the entire humanity.

Five pillars of a self-reliant India

Recalling the devastation in Kutch after the earthquake, Prime Minister said that through determination and resolve, the area was back on its feet. A similar determination is needed to make the country self-reliant.

He said that a self-reliant India will stand on five pillars viz. Economy, which brings in quantum jump and not incremental change; Infrastructure, which should become the identity of India; System, based on 21st-century technology-driven arrangements; Vibrant Demography, which is our source of energy for a self-reliant India; and Demand, whereby the strength of our demand and supply chain should be utilized to full capacity. He underlined the importance of strengthening all stakeholders in the supply chain to increase, as well as fulfil, the demand.

Prime Minister announced a special economic package and gave a clarion call for Atmanirbhar Bharat. He noted that this package, taken together with earlier announcements by the government during COVID crisis and decisions taken by RBI, is to the tune of Rs 20 lakh crore, which is equivalent to almost 10% of India’s GDP. He said that the package will provide a much-needed boost towards achieving ‘Atmanirbhar Bharat’.

Prime Minister observed that the package will also focus on land, labour, liquidity and laws. It will cater to various sections including cottage industry, MSMEs, labourers, middle class, industries, among others. He informed that the details of the contours of the package will be provided by the Finance Minister from tomorrow, in the coming few days.

Talking about the positive impact of reforms like JAM trinity and others, brought about in the last six years, Prime Minister said that several bold reforms are needed to make the country self-reliant, so that the impact of crisis such as COVID, can be negated in future. These reforms include supply chain reforms for agriculture, rational tax system, simple and clear laws, capable human resource and a strong financial system. These reforms will promote business, attract investment, and further strengthen Make in India.

Prime Minister remarked that self-reliance will prepare the country for tough competition in the global supply chain, and it is important that the country wins this competition. The same has been kept in mind while preparing the package. It will not only increase efficiency in various sectors but also ensure quality.

Highlighting their contribution to the country, Prime Minister said that the package will also focus on empowering the poor, labourers, migrants, etc., both from organized and unorganized sectors.

He observed that the crisis has taught us the importance of local manufacturing, the local market and local supply chains. All our demands during the crisis were met ‘locally’. Now, its time to be vocal about the local products and help these local products become global, he said.

Prime Minister noted that several experts and scientists have said that the virus is going to be part of our lives for a long time. But, it is also important to ensure that our life does not revolve only around it. He exhorted people to work towards their targets while taking precautions like wearing masks and maintaining ‘do gaz doori’.

On the fourth stage of Lockdown, he said that its contours will be completely different from those seen yet. On the basis of recommendations received from states, new rules will be framed, and information about the same will be conveyed before 18th May.