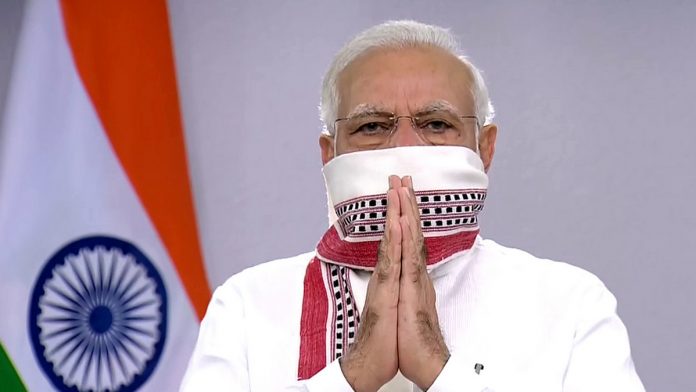 The Prime Minister expressed solidarity with the people of Assam during these difficult times and enquired about the steps taken by the State government for the relief and rehabilitation of flood-affected people and treatment of COVID-19 positive patients in the state.

Sonowal apprised the Prime Minister that 26 districts of the state had been affected by the current wave of flood and the state government had taken steps for providing shelter to the flood-affected people in the relief camps set up for the purpose and strict adherence to COVID-19 protocols had been ensured in those relief camps.

He also informed that huge areas including farmlands and houses had been severely affected by the erosion caused by the Brahmaputra and its tributaries.

Sonowal informed about the COVID-19 scenario in the state, that the number of positive cases was increasing in the state as a result of ramping up of testing capacity by the health department.

The Chief Minister expressed confidence that the health department would be able to handle the situation even if the number of positive cases goes up rapidly in the near future.

Referring to the Baghjan oil well fire incident, the Chief Minister informed that Union Petroleum Ministry had been persistently carrying out activities to completely douse the fire and the State Government was extending all cooperation in this regard.

The Prime Minister said that the Central Government was keeping a close watch on flood, erosion, COVID-19 and Baghjan situation in the state and had been standing closely with the people of Assam during these difficult times. He also assured all help and cooperation from the Central government in managing these challenges