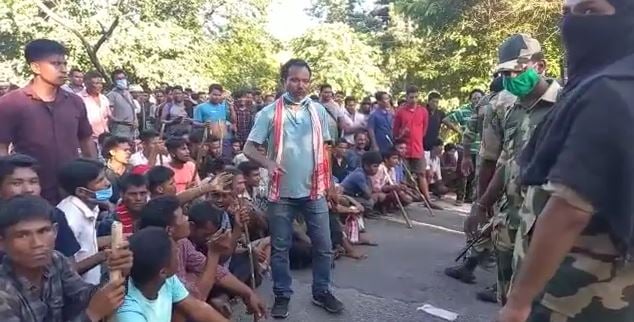 According to the Dhemaji district police, the protesters resorted to violence while attempting to resist the occupation of forest lands in the Simen Chapori area.

The sp said, “Initially the local people resisted the settlement. But the civil administration told them since they were actually flood affected people we should not take a harsh view on them. So they were allowed for a couple of days. But slowly a new set of people started coming. Locals expressed resentment.”

He further said, “We were successful actually in diverting the new set of people to the relief camps. They were happy. But suddenly two days back another set of people came from Mesaki Chapori over a night and they occupied different areas and started clearing the forest besides setting up fresh camps.”

According to Ghanwat, clearing of forest was actually not right in the law. “Nobody can cut the jungles. Chief minister had last monthly announced that the particular area will be transformed into a biodiversity park. But then since these people were truly flood affected people we dealt in a sympathetic way.”

However, the SP said, “Following all government principles and guidelines, we started eviction drive this morning. We went and announced that those who were genuine will be given appropriate rehabilitation after a proper survey and assessment. Those who were genuine, they obliged. At the same time, suddenly there was a mob of around 2000.”

The SP said that the protesters pelted stones. Two police vehicles were damaged. Some of the police personnel even received minor injuries. The protesters also vandalised some nearby shops.

“Even then the police didn’t resort to lathi charge and firing. Police kept on pursuing and opened the roads. We involved the students’ leaders, local politicians and groups. As of now, temporarily everybody has been relocated to the relief camps. The situation is completely under control now,” the SP added.