Along with Bihu songs, anti-government slogans reverberated all around 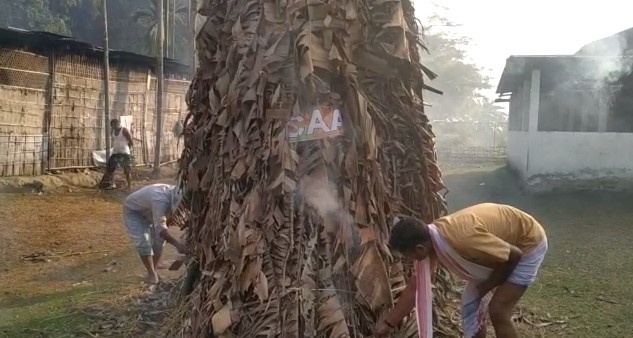 The much-awaited Bhogali Bihu celebrations this year were marked by hunger strikes and protests across Assam against the controversial Citizenship Amendment Act (CAA).

A number of activists, students’ bodies, civil organisations and local people staged hunger strikes on uruka while many burnt copies of the bill with mejis (bonfire) on January 15th, 2020.

Though the harvest festival is usually celebrated with fanfare and feast, this year the festival is being used by the people of the state to register a protest against the CAA. Along with Bihu songs, anti-government slogans reverberated all around.

The All Assam Students’ Union (AASU) and 30 other supporting organisations had appealed to the people to burn the copies of the contentious CAA in the flames of meji to register protest against the Act.

Posters and banners against the citizenship act have been put up in the open fields where people will take part in community feasting. Anti-CAA posters were also visible at marketplaces where vendors are selling Bihu foodstuffs and other items.

Though the protests against the CAA completed more than a month in Assam, the rage refuses to die. The protests over the CAA began in the state in the first week of December 2019, much before the rest of the country.

Ever since the Citizenship Amendment Bill was passed by the Rajya Sabha on December 11th, 2019, every day, a well-attended anti-CAA rally or demonstration is witnessed in almost all the districts of the state.

The Union Home Ministry has issued a notification stating that the provisions of the Act will come into force from January 10th, 2020. However, the Centre is yet to frame rules for the Act.