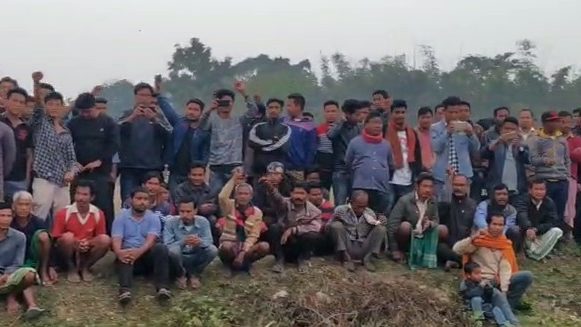 A pall of gloom has descended at his native place Kolbari village in Tamulpur in Assam’s Baksa district. As the villagers are waiting for the mortal remains of the martyred jawan to reach his village for the last rites, slogans of ‘Pakistan murdabad’ were raised by the locals.

Sea of humanity has descended on the site of the last rites. Emotions are running high as several people in the crowd are breaking into tears while demanding strict and swift action against the terror outfits.

Basumatary would be accorded a state funeral. The news of his martyrdom has shattered the family members, his friends and relatives. People from all walks of life have been making a beeline to his house since on February 14th, 2019 evening.

The attack on a CRPF convoy in Jammu and Kashmir’s Pulwama district that killed more than 40 jawans on February 14th, 2019 is the biggest terror attack in the past five years. The Jaish suicide bomber, identified as Adil Ahmad Dar, rammed an SUV laden with over 250 kg of explosives into the CRPF bus carrying about 40 personnel.