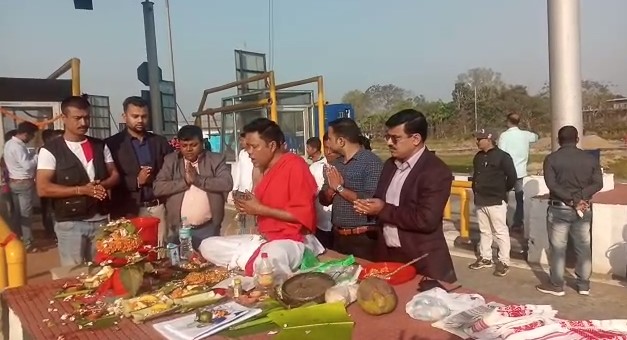 The Asom Jatiyatabadi Yuba Chatra Parishad (AJYCP) had earlier “warned” the Assam government not to reopen the toll gate without construction and maintenance of National Highway 37.

The toll gate remained closed since 2018 due to protests by AJYCP and Krishak Mukti Sangram Samiti.

The Nagaon district administration and police deployed a posse of security personnel at the toll gate to counter any untoward situation. A puja was performed at the toll gate ahead of its opening on March 1st, 2020.

A private company has been given the contract to collect toll fee. According to the NHAI, the four-wheeler private vehicles will have to pay Rs 95 for one way and Rs 140 for both ways.

FASTag – Electronic Toll Collection on Toll Plazas on National Highways – will be introduced after three months at the toll plaza.

The NHAI reopened the Bijni toll gate on National Highway 31 in Chirang district was opened on January 31st, 2020.