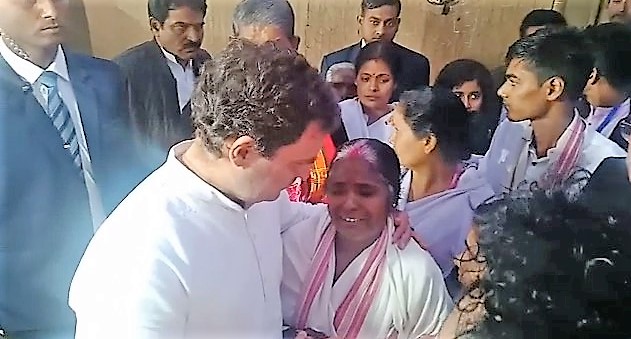 A team led by Assam Pradesh Congress Committee president Ripun Bora would visit the family members of the deceased and hand over the aid.

The former Congress president, addressing a massive rally in Guwahati’s Khanapara, said that neither the Bharatiya Janata Party (BJP) nor the Rashtriya Swayamsevak Sangh will be allowed to alter the identity of the state, country.

Gandhi, along with other Assam Congress leaders, also met the family members of two deceased persons – Sam Stafford and Dipanjal Das – at Hatigaon area in Guwahati and Chhaygaon in Kamrup district on December 28th, 2019.

The other two persons who died in police firing have been identified as Ishwar Nayak and Abdul Alim. An oil tanker driver identified as Azizul Hoque was charred to death when his vehicle was set on fire in Orang.

Accusing the BJP of spreading hatred, Gandhi said that Assam might return to the path of violence because of the government’s policies at the Centre and in the state.

Violent protests broke out in several parts of the state after the Citizenship (Amendment) Bill was passed in parliament on December 11th, 2019.