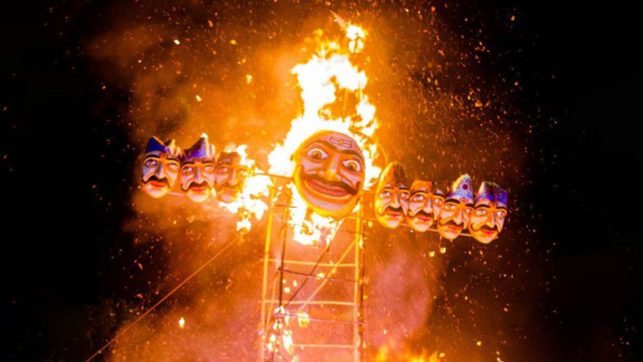 People set effigy of Ravana on fire as a part of Dussehra celebration on the last day of Durga puja to mark the victory of good over evil. Ministers, MLAs and celebrities also take part during the celebration. But, the question arises here is whether the reality has changed or not.

The world is vexed with intolerance and extremism. True values of harmonious co-existence and mutual respect are lost. Caste, class and religious differences are so pronounced in the country. Crimes against women including rape, assault, acid attack and domestic violence have increased at an alarming rate. People are lynched to death for carrying beef, thrashed for not uttering religious slogans and many more.

So, Dussehra celebration will be meaningless if people fail to bring the negativities under control and curb them. It is the age of advanced information and technology. Practical knowledge is more preferred than the theoretical knowledge. A society can be built stable and well organised by contributing practically without driven by superstitions. It will, then, also give a fillip in the country’s economy.

The fragile ecological balance is on the brink of collapse due to the aggressive religious practices. Idols used in Durga puja are made of plaster of paris and highly toxic chemicals. These pollute the water bodies resulting death of aquatic lives and reduction of oxygen quantity. Consequently, the climate gets affected directly or indirectly, which is a matter of great concern.

Celebrating and promoting Ravana Daah will no way help in superseding the psychology of the people. Government and the organizations including the civil societies should concentrate and work on imparting quality education which will foster people residing in every part of the state. The government should make people aware about crime and punishment rather than setting effigy of Ravana on fire. Knowledge is the only weapon which can defeat the evils in the world.