Religious Sentiments Will Be Respected: Rijiju Assures Bhaichung On Move To Open Kanchenjunga For Mountaineering

Several political parties, students' bodies and social organizations in Sikkim are threatening to launch protests unless the order is immediately withdrawn 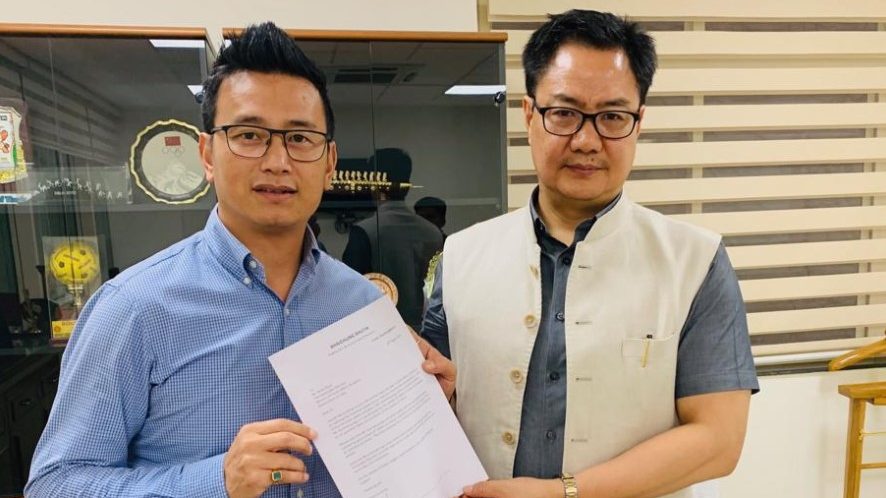 With discontentment brewing over the Centre’s decision to open the mighty Kanchenjunga for mountaineering expeditions and trekking by foreigners, Union Minister of Sports and Youth Affairs Kiren Rijiju has assured former Indian footballer Bhaichung Bhutia that the local religious sentiments will be respected while conducting any adventure and sports event.

Founder and vice president of Hamro Sikkim Party, Bhutia met Rijiju on August 23rd, 2019 and also submitted a memorandum. “Mt Kanchenjunga is a sacred peak for the people of Sikkim. It is also worshipped as our guardian deity and protector of the people of Sikkim,” Bhutia said.

He added, “Mt Kanchenjunga and other peaks that are worshipped has been notified by the Government of Sikkim as sacred mountains and thus has stopped from all commercial climbs.”

Rijiju told Bhutia that he fully agrees with him and will ensure that the local religious sentiments are respected.

Several political parties, students’ body and social organizations in Sikkim are threatening to launch protests unless the order is immediately withdrawn. The Sikkim Lepcha Youth Association stated that the decision to permit climbing on Mt Kanchenjunga as greatly afflicted and disturbed the sentiments and the cultural ethos of the people at large.

The Sikkim Bhutia Lepcha Apex Committee said that the Ministry of Home Affairs has violated the Article 371F of the Indian Constitution, which protects what people consider as sacred. The local unit of Vishwa Hindu Parishad said that the order is an insult to Hindu-Buddhist religious sects of the state as they consider the Mt Kanchenjunga as the guardian deity of Sikkim since time immemorial.

The 10 MLAs from Sikkim Democratic Front who recently joined the Bharatiya Janata Party also submitted a memorandum to Sikkim Governor Ganga Prasad and urged the Centre to rethink on the decision to permit climbing on Mt Kanchenjunga.

Kanchenjunga is the third highest mountain in the world. It lies between Nepal and Sikkim, India, with three of the five peaks (Main, Central, and South) directly on the border, and the remaining two (West and Kangbachen) in Nepal’s Taplejung District.

Kangchenjunga was first climbed on May 25th, 1955 by Joe Brown and George Band, who were part of a British expedition. They stopped short of the summit in accordance with the promise given to the Chogyal (King) that the top of the mountain would remain intact. Every climber or climbing group that has reached the summit has followed this tradition. Other members of this expedition included John Angelo Jackson and Tom Mackinon.

There are four climbing routes to reach the summit of Kanchenjunga, three of which are in Nepal from the southwest, northwest, and northeast, and one from northeastern Sikkim in India. To date, the northeastern route from Sikkim has been successfully used only three times.

The Pawan Chamling Government had banned commercial mountaineering in all the peaks of Sikkim in 2001. However, it kept some peaks open for mountaineering like Jopuno, Frey’s Peak, Tinchenkhang, Lamo Angden, etc. in 2005-06 but people had to seek permission first to scale these peaks.