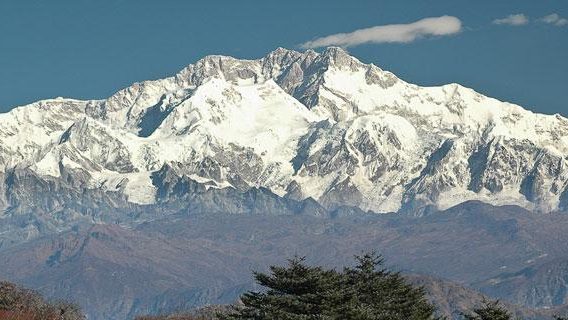 For the first time ever, the Centre has lifted restrictions on foreigners taking up mountaineering expeditions to 24 peaks in Sikkim, including Mount Kanchenjunga, the world’s third-highest peak. The decision has shocked and angered many in the Himalayan State. Several youth organizations, local political parties and leaders came out and vehemently opposed the decision.

The Sikkim Lepcha Youth Association (SLYA) issued a statement on their Facebook page opposing the decision to permit climbing on Mount Kanchenjunga. “This particular news of permitting mountaineering expeditions to one of the most sanctimonious peak of Sikkim, which is regarded as a Guardian Deity of Sikkimese people has greatly afflicted and disturbed the sentiments and the cultural ethos of the people at large,” the SLYA wrote on Facebook.

“We resent this decision of the Government of India that overlooked the cultural sentiment of the Sikkimese people. The Ministry of Home Affairs (MHA), Government of India should reconsider the decision to open Mt. Kangchendzong for mountaineering expeditions immediately,” SLYA added.

The convenor of Sikkim Bhutia Lepcha Apex Committee (SIBLAC), Sh Tseten Tashi Bhutia through a press communique said that the Ministry of Home Affairs (MHA) has violated the Article 371F of the Indian Constitution, which protects what people consider as sacred.

He said, “The announcement is a violation of the special provision of 1991 and I urge the state government to take up the issue with the Centre keeping in view of the sentiments of the people.”

Soon after the notice was issued, State Chief Secretary told the Sikkim Express that Kanchenjunga is a sacred mountain for Sikkim and the state government will discuss and inform the Centre about the policies of it.

Meanwhile, former Indian footballer and Hamro Sikkim Party vice president, Bhaichung Bhutia submitted a memorandum to Union Sports Minister Kiren Rijiju on August 23rd, 2019. In the memorandum, Bhutia had mentioned that the sanctity of Mt Kanchenjunga is to be protected and requested the Union minister to look into the matter and to take the necessary action at the earliest.

The local unit of Vishwa Hindu Parishad (VHP) too joined in the bandwagon of protests against the MHA’s decision. C P Giri, president of VHP Sikkim unit is of the view that the order is an insult to the state. “The order is an insult to Hindu-Buddhist religious sects of the state as they consider it as the guardian deity of Sikkim since time immemorial,” he said.

On August 24th, 2019, the 10 MLAs from Sikkim Democratic Front (SDF) who recently joined the Bharatiya Janata Party (BJP) met Sikkim Governor Ganga Prasad and submitted a memorandum urging the Centre to rethink the decision to permit climbing on Mt Kanchenjunga. The people of Sikkim would appreciate it if the sanctity of the peak is maintained and climbing on Mt Kanchenjunga is not allowed,” the MLAs told the Governor.

Notably, the Pawan Chamling government had banned commercial mountaineering in all the peaks of Sikkim in 2001. It kept some peaks for mountaineering like Jopuno, Frey’s Peak, Tinchenkhang, Lamo Angden, etc. in 2005-06 but people had to seek permission first to scale the peaks.

<a href="https://www.time8.in/barsha-rani-bishaya-takes-to-facebook-to-vent-out-her-anger-on-curator-over-indecent-proposal-new/" rel="bookmark" title="Barsha Rani Bishaya Takes To Facebook To Vent Out Her Anger On Curator Over ‘Indecent Pro