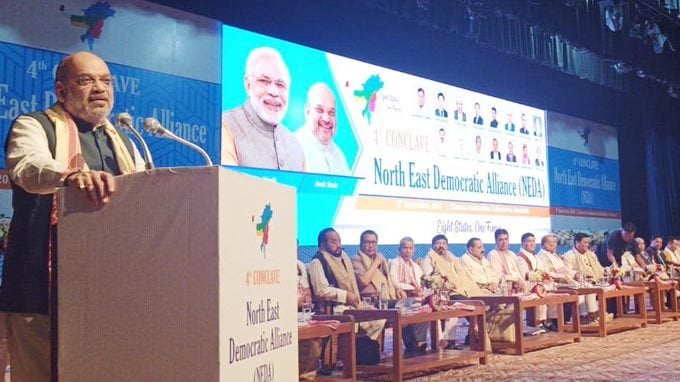 With Union Home Minister Amit Shah’s green signal to implement the contentious Citizenship (Amendment) Bill or CAB, another wave of massive repercussions are expected in the Northeast, especially in Assam. While speaking at the recent North East Democratic Alliance (NEDA) convention in Guwahati, Shah stressed that not a single intruder will be allowed to live in Assam. He also said that December 31st, 2014 will be the cut-off date based on which the Bill would be implemented. Even, NEDA Convener and Assam Finance Minister Himanta Biswa Sarma emphasized that the Bill would not affect the provision of the sixth schedule of the Constitution of India and the Inner Line Permit (ILP) system in the Northeast region.

On contrary to that, the Meghalaya Chief Minister Conrad K Sangma said the Northeast region will be the worst affected if the Bill is passed. He also expressed his fear about possible migration to Meghalaya from neighbouring countries once the Bill is implemented.  “The CAB, if passed, may affect the ILP or other laws in the region,” Sangma said. He also urged all the Northeastern states to stand in unison to raise the concerns of the region for the common good of the people of the region. The Congress in Assam also vehemently opposed the Centre’s move on the Bill.

The BJP-led central government in its first term tabled the Bill in the parliament, which sparked massive protests across the Northeastern states. The Bill was passed by the Lok Sabha on January 8th, 2019 but lapsed in the Upper House of the parliament – Rajya Sabha.

The Bill had faced massive protest in its public hearing held in Guwahati in May 2018 while it received huge support in the Barak Valley. Almost all the political parties and ethnic organizations of the region including the powerful All Assam Students’ Union (AASU) had staged several rounds of protests demanding immediate withdrawal of the Bill for the greater interest of the Assamese community. It may be mentioned that the Meghalaya was the first state to oppose the Bill followed by the Nagaland and Manipur.

The Bill seeks to grant Indian citizenship to Hindus, Jains, Sikhs, Christians, Parsis and Buddhists who have become victims of the religious persecution in Pakistan, Bangladesh and Afghanistan and have entered India on or before December 31st, 2019.

The AASU has been demanding proper implementation of the historic Assam Accord to filter out the genuine Indian citizens and also an error-free National Register of Citizens (NRC) on the basis of the cut-off date laid by the Accord. Now, after the publication of the final NRC list on August 31st, 2019, the students’ body and other organizations have vehemently opposed the Centre’s decision to implement the Bill on the basis of December 31st, 2014 as the cut-off date. The AASU said it would jeopardize the identity of the indigenous people of the Northeastern region as Assam has to bear the highest burden of illegal Bangladeshis.

The BJP-led government in its second term implemented the Muslim Women (Protection of Rights on Marriage) Bill, abrogated Article 370 and 35A from Jammu Kashmir and published the most awaited final NRC list in Assam. Now, all the eyes are on the government’s move on the Citizenship (Amendment) Bill. Will the government pass the bill at any cost or bow down to the pressure of ethnic organization?