Dressed in convocation robe, the students of the Tezpur University held peaceful protests against the Citizenship Amendment Act 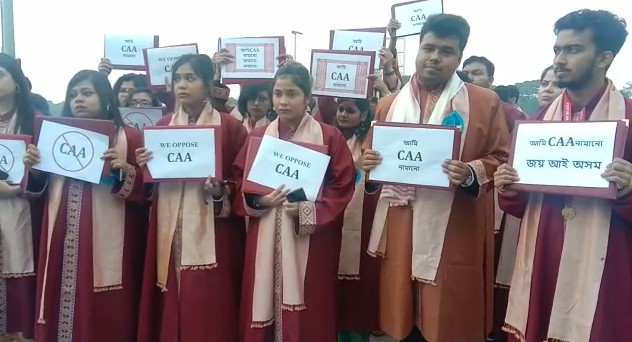 The students of Tezpur University (TU) held peaceful protests against the Citizenship (Amendment) Act, 2019 (CAA) on December 23rd, 2019 at the varsity premises during the 17th convocation ceremony.

“Our protest against the CAA will continue. The students of the varsity will not accept the citizenship law,” said a student dressed in convocation robe.

Another girl student added, “I hail from Tezpur. I have completed my Masters in Linguistics. People across the country and abroad too are protesting against the CAA. The students’ community of Assam will never accept the law.”

The 17th convocation of Tezpur University was held at KalaguruBishnu Prasad Rabha Auditorium. Assam Governor Jagdish Mukhi conferred degrees and diplomas upon 1275 students who graduated during the academic session 2017-18.

82 doctoral degrees, 741master’s degrees, 402 bachelor’s degrees and 42 diplomas were conferred on students who passed out in 2017-18. 46 students were honoured with gold medals.

Violent protests broke out in several parts of the country after the citizenship law was passed in parliament on December 11th, 2019. Several people have died in Assam, Karnataka and Uttar Pradesh in violence over the week.

Prime Minister Narendra Modi and Home Minister Amit Shah have blamed the opposition Congress and “urban naxals” of “misleading” the youth the country. The two BJP leaders have appealed the youth to “read the Act and give it a chance”.

Assam Chief Minister Sarbananda Sonowal had also appealed the students not be misled regarding the citizenship law. Student leader turned politician, Sonowal had earlier faced the wrath for asking the youth of the state to stay away from participating in protest rallies.