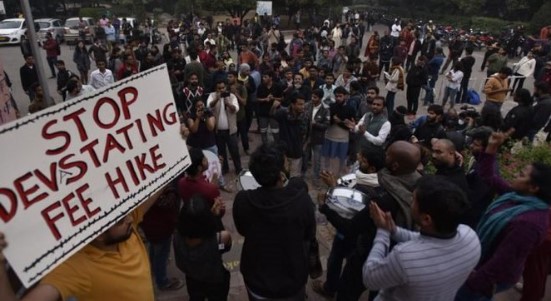 The students of the Tezpur University expressed solidarity with their counterparts in Delhi’s Jawaharlal Nehru University (JNU), who are seeking a rollback of a recent hike in fees.

The Tezpur University Students’ Council (TUSC) 2019-20 condemned the “despicable actions taken action the interests of the students of the JNU in an inhuman manner”.

“The treatment meted out to the students by the police personnel was against the basic grounds of human rights and violates Article 19 of the Indian Constitution that states the Right to Freedom of Speech and Expression,” stated TUSC is a press communique.

The Council mentioned that the “lack of communication and transparency regarding the fee hike is extremely disturbing to the interests of students”.

“The disinvestment in government institutions for higher studies moving them towards privatisation is disheartening and also stands in irony in a country where education was made free and compulsory years back. The TSCU stands in solidarity with the students of JNU and professes a similar stand regarding excessive fee hike that would soon turn education accessible to the only privileged class,” it stated further.

It may be mentioned, the Cotton University in Guwahati has also come out in support of the protest over fee hike in the JNU, one of top most university in the country.

Condemning the ‘barbarity’ over the students, the Cotton University Students’ Union said, “It is not a protest for a single university, it is a protest by students against the barbarity constrained upon them in the name of education.”

Thousands of students protesting a hostel fee hike have brought one of the country’s most prestigious universities to a standstill for almost a month.