The Deafening Voices of The ‘Silenced’ Assam Gaining Momentum 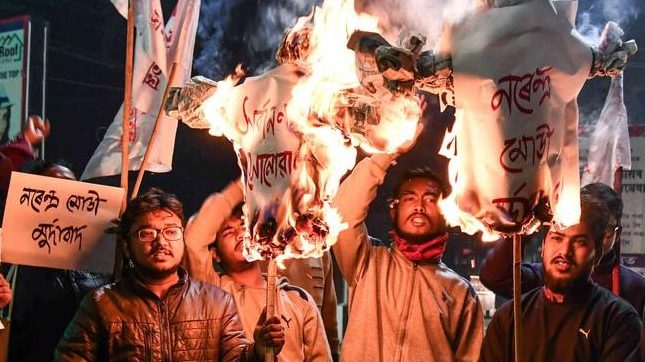 The wrath over the Bharatiya Janata Party’s attempt to rescind the dateline set by the historic 1985 Assam Accord to identify and deport illegal migrants who entered after 1971 and to grant Indian Citizenship to migrants by implementing the Citizenship (Amendment) Bill, 2016, which sets December 31, 2014 as cut-off date, has still remained unfazed across the Northeast region particularly in Assam.

Addressing the question of constitutional validity of the Illegal Migrants (Determination by Tribunal) Act, 1983 (IMDT Act), the then National Democratic Alliance (NDA) government under Atal Bihari Vajpayee said in an affidavit before the Supreme Court in Sarbananda Sonowal  Vs Union of India:

“….large-scale illegal migrants from Bangladesh have not only threatened the demographic structure of the area but have seriously impaired the security of the nation, particularly in the present circumstances. The need for expeditious identification of illegal migrants is more pressing now than ever. It is not a matter of dealing with a religious or linguistic group. It is a question of identifying those who illegally crossed over the border and continue to live in India contrary to the Indian law and the Constitution.”

Later, the apex court struck down the IMDT Act by saying it unconstitutional and found that the “IMDT Act and the Rules made there under would reveal that …. have been purposely so enacted or made so as to give shelter or protection to illegal migrants who came to Assam from Bangladesh on or after 25th March, 1971 rather than to identify and deport them.”

But, the engrossing fact is, after 13 years, the Prime Minister Narendra Modi-led NDA government’s move to grant Indian citizenship to illegal migrants by implementing the Citizenship (Amendment) Bill, 2016.

Assam Accord 1985 and the signatories

With the demise of former Asom Gana Parishad’s vice president Biraj Kumar Sarma on January 15th, only one out of three signatories representing Assam Movement is alive.

Now, the eyes are on the lone survivor of the signatories – former Assam Chief Minister Prafulla Kumar Mahanta. The few questions that are revolving in the minds of Assam public are –

The oscillating mysterious situation over not forwarding the resignation letters to the Assam Governor has also raised questions.

On the other hand, 30 different ethnic organizations spearheaded by All Assam Students’ Union (AASU) in one camp and 70 organisations spearheaded by Krishak Mukti Sangram Samiti (KMSS) in another have been demanding the implementation of the Assam Accord 1985 to detect and deport the illegal migrants from Assam.

But the question is whether it will be possible to identify and deport the illegal Bangladeshis without an Indo-Bangla treaty.

In a major embarrassment to the saffron party, four BJP legislators have raised voice against the party’s decision to implement the contentious Citizenship (Amendment), Bill, 2016 that seeks to grant Indian citizenship to migrants belonging to six minority (non-Muslim) religions – Hindus, Sikhs, Buddhists, Jains, Parsis and Christians who have become victims of religious persecution in neighbouring nations – Afghanistan, Bangladesh and Pakistan and have entered India on or after December 31, 2014. More insights on the Bill:

Protest echo in other North-eastern states

The heat of the flare of anger over the Bill issue has spread to other North-eastern states also.

Manipur: Manipur Chief Minister N Biren Singh on January 13 urged the Union Home Minister Rajnath Singh to keep Manipur outside the ambit of the Citizenship (Amendment) Bill, 2016. In fact, the CM emphasized to implement the Manipur People’s (Protection) Bill, 2018, which was passed by the Manipur Legislative Assembly on July 23, 2018, for the greater cause if the indigenous people of Manipur.

Mizoram: Moreover, the Mizoram Chief Minister Zoramthanga on January 18 called on the Union Home Minister and expressed the Manipur government’s opposition to the Bill.

Nagaland: The Nagaland government is also not in conformity with the NDA government on the Bill issue.

Student bodies, local organisations are leaving no stone unturned to protest against the “dangerous” CAB 2016.

Singing sensation and heartthrob of the young generation Zubeen Garg, off late, came to the warfront with the BJP on the ongoing Bill issue. While warning the BJP not to go against the indigenous people, Zubeen said he did a mistake by singing the BJP’s theme song for the 2016 Assembly election.

Protesters of 70 organisations spearheaded by KMSS on January 7 stripped naked and staged protest against the contentious CAB 2016 in the national capital demanding scrapping of the Bill for the greater cause of the indigenous people of the state. Later, this was followed in some parts of Assam also. Moreover, Assam CM Sarbananda Sonowal was shown black flag in various parts of the state. MLAs and MPs of the ruling party too were greeted with black flags in Assam. Sedition, the serious charge, is being applied to fix those who disagree with the government. The BJP is allegedly doing that to keep mouths shut to implement the Citizenship (Amendment) Bill, 2016. The ruling BJP is seemed to dominate the opponents using pliant police force ahead of the crucial general elections to be held this year.

The Assam Police had booked prominent intellectual Hiren Gohain on sedition charge over his ‘independent Assam’ statement. Moreover, Assam firebrand leader and KMSS advisor Akhil Gogoi and Manjit Mahanta were also booked on the same charge. However, the trio was granted interim bail into the case. College students also boycotted classes and “banned” entry of the BJP leader in their respective campuses. Massive protest in Assam has been going on ever since the Bill was passed in the Lok Sabha and this has resulted in substantial loss of property in the State.