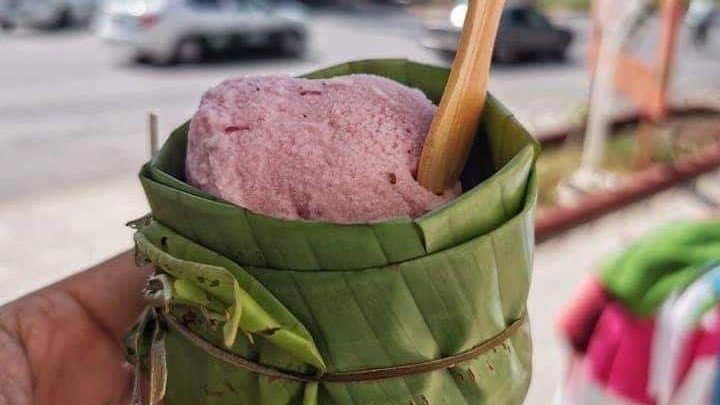 At a time when environmentalists are pressing for a total ban on plastic, a photograph of a scoop of ice-cream being served in a cup made out of banana leaf has gone viral on the social media platforms.

The photograph shared on the Facebook page titled Initiative United North-East on September 3rd, 2019 has garnered a mixed reaction from all over the country and abroad due to its uniqueness. The pink coloured scoop of ice cream served in an eco-friendly cup with a bamboo spoon has won the hearts of the nature lovers.

The netizens also did not hesitate to ask the government to look into the ‘alternative solution’ before making a blanket ban on plastic.

The location of the photograph is yet to be identified. We couldn’t ascertain if any place in Northeast serves ice cream in a banana leaf. However, the page has tagged HoneyDukes Rolled Ice Cream, so it might be one of their products.

While some of the users hailed the idea as a “great initiative”, and urged to “make this a movement”, others expressed concern over deforestation, plantation of banana plants.

Check out the comments:

The Government of India is set to impose a nationwide ban on plastic bags, cups and straws on October 2nd, 2019. The transport ministry, food and consumer affairs department has directed to stop using single-use plastic after September 15th, 2019.