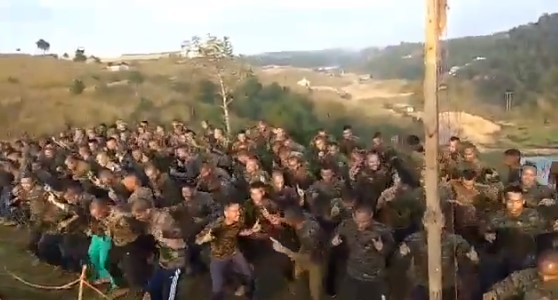 Dancing is a wonderful activity for stress relief. Like any other physical activity, dancing releases the neurotransmitter, endorphins (also called happy hormones) which makes us feel happy and optimistic. True indeed.

One such ‘happy’ video was shared by Meghalaya Police on October 30th, 2019 on their social media handles. The video shot in picturesque Sohpian, Nongstoin, West Khasi Hills will instantly cheer you up.

In the 51 second video, the trainees of 4th Meghalaya Police Battalion are seen letting their hair down and tapping their feet in full vigour as they perform the traditional Cham Chama Cham Cham morale-boosting exercise.

The trainees, dressed in camouflage, can be seen raising both their hands in the air, jumping in joy and singing Cham Chama Cham Cham in unison. As soon as the video was shared, netizens couldn’t help but hail the department for sharing the video. On the other hand, many users said that de-stressing is important for a healthy mind.

Recently, a video of three cops singing a melodious song to spread the anti-drug message in society also received a humongous positive response from netizens. The song titled ‘Say no to drugs’ in Atong language, a local dialect in the South Garo Hills district won many hearts.

So next time, you feel low or lack positivity, you know what to do. Go Cham Chama Cham Cham like nobody’s watching.