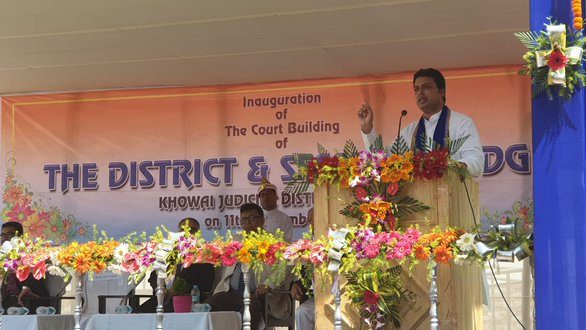 Emphasising the importance of cleanliness in villages, the Tripura Chief Minister Biplab Kumar Deb on September 13th, 2019, announced to donate his next six months’ salary to 1100 village market committees to install dustbins. “To ensure proper cleanliness and hygiene, now every shops and establishment in Tripura has to take care of proper garbage disposal by keeping dustbins & maintaining area clean,” Deb said. He further appealed the people of the state to join hand in making the state a ‘garbage free’.

Lashing out at the Manik Sarkar-led Communist Party of India (Marxist), Deb said, “The previous government did nothing for the welfare to the villages in its 20 years of rule in the state.” He further requested all the elected members to take Prime Minister Narendra Modi as role model and move forward towards the development.

On the other hand, reiterating the Bharatiya Janata Party’s ‘zero-tolerance against corruption’, Deb announced the increased monthly allowances for village heads to give them their deserved value and to avoid them from involving in corruption. “I am not going to tolerate corruption in any part of the state. The corruption and corrupted community will not be forgiven,” he added.