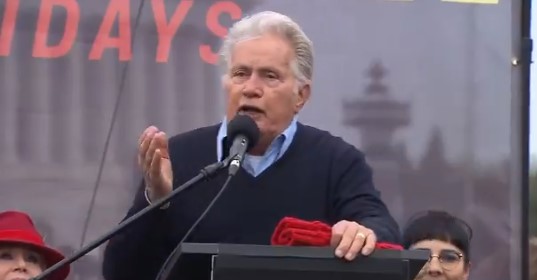 Hollywood actor Martin Sheen recited Rabindranath Tagore’s poem Where The Mind Is Without Fear at the Fire Drill Fridays event in Washington, DC on January 10th, 2020. It was a weekly climate change protest event that is organised by 81-year-old actress and activist Jane Fonda.

Sheen began his speech by speaking about women leading the protest. He then went on to talk about an Irish parable, before going on to recite the poem by Tagore.

Where The Mind Is Without Fear was written by 1913 Nobel laureate Tagore before India’s independence. The poem was published in 1910 and was also included in his collection of poems Gitanjali.

The poem is an expression of the poet’s reflective spirit and contains a simple prayer for his country, the India of pre-independence times.

Though Sheen didn’t mention Tagore as the source of his speech during his address, the desi Twitter is proud of the actor and applauded the actor for his speech on climate change.

The video of Sheen’s speech has now gone viral on social media and the video has garnered a humongous response from tweeps.