Owaisi earlier announced that he will unfurl the national flag at historic Charminar in Hyderabad on January 25th, 2020 midnight, the eve of the Republic Day 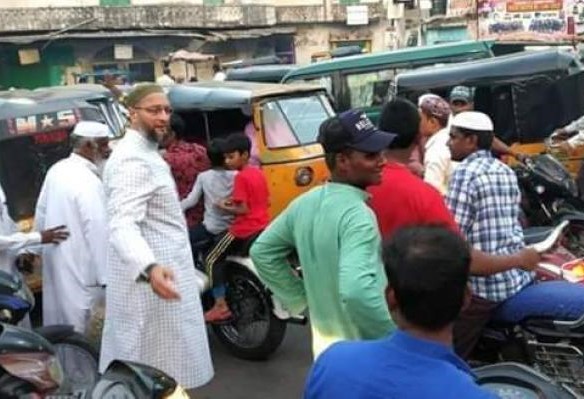 All India Majlis-e-Ittehad-ul-Muslimeen (AIMIM) chief Asaduddin Owaisi and his party workers were seen managing the traffic in Hyderabad after an anti-Citizenship Amendment Act (CAA) rally carried out by the party led to congestion on the road.

Owaisi led a ‘Tiranga Yatra’ rally in Shashtripuram to mark their protest against the CAA and National Register of Citizens on January 10th, 2020.

In viral videos, Owaisi, dressed in a grey attire, was seen clearing the traffic jam along with his party workers.

“We are not against granting citizenship to persecuted people from Pakistan, Bangladesh and Afghanistan, but this should not be done on the basis of religion. CAA aims to dismantle India as a secular state and replace it with a Hindu Rashtra,” the AIMIM chief said.

Owaisi earlier announced that he will unfurl the national flag at historic Charminar in Hyderabad on January 25th, 2020 midnight, the eve of the Republic Day.

“As the clock strikes 12, we will unfurl the tricolour in front of Charminar, we will also sing the National Anthem and take an oath to defend the Republic,” he said.

Owaisi also mentioned that AIMIM will form a silent human chain from Mohammadi Lines to Bapu Ghat to “remember Gandhi and his cruel assassination” on January 30th, 2020.