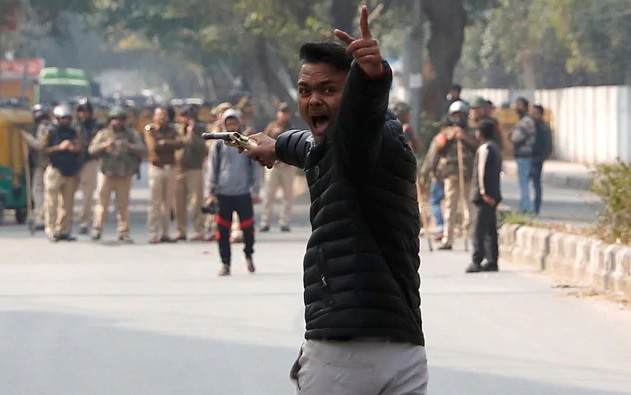 A man open fired at a protesting student of the Jamia Millia Islamia during an anti-CAA protest at Delhi’s Jamia area on January 30th, 2020.

As per media reports, the Jamia students were marching towards Rajghat to hold a protest against the controversial CAA and the National Register of Citizens today.

A video clip of the man, dressed in a black jacket brandishing his gun and open firing at crowd standing meters away from dozens of policemen deployed outside the university is currently doing rounds in the media. He reportedly shouted ‘Yeh lo aazadi’ (here’s your freedom) and ‘Delhi Police Zindabad’ (Long live Delhi Police)”.

The South-East District (Delhi) DCP Chinmoy Biswal informed that the student who was shot at has been identified as Shadab Farooq. He sustained injuries in his left hand and he has been referred to the trauma centre of All India Institute Of Medical Sciences (AIIMS). The accused identified as Ram Bhagat Gopal(19) has also been nabbed by the police. He is a resident of Gautam Buddha Nagar (Uttar Pradesh).

Meanwhile, the Jawaharlal Nehru University Students’ Union slammed the terror attack and said that it is the ‘result of radicalization via hate campaigns every night on TV’.

On the other hand #ArrestAnuragThakur is trending on the microblogging site Twitter as the users are asking Delhi Police to immediately arrest the BJP leader.

The firing took place days after the Union Minister of State for Finance, urged a crowd at an election rally in Delhi and raised slogans like “goli maaro”–shoot down traitors.

The Congress came down heavily against the BJP over the firing incident at Jamia and questioned if this is what its party leaders like Anurag Thakur wanted. ‘What kind of police force is Amit Shah running? Delhi police is standing idly by as a man shoots at peaceful protestors. Is this what BLP leaders like MoS Finance, Anurag Thakur intended? Creating an armed militia of radicalised youth.’