Netizens heaped praises on the young bureaucrat for her singing skills 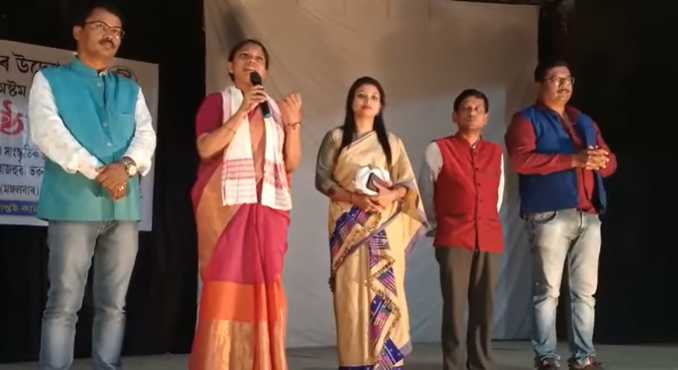 Popularly known as the ‘Bard of Brahmaputra’, music maestro Bhupen Hazarika had the power to spell his magic and enthrall audience beyond Assam, across borders.

On November 5th, 2019, Xudhakontho‘s death anniversary was observed across the state. In one such function, the Deputy Commissioner of Sivasagar, MS Lakshmi Priya surprised everyone by singing one of his beautiful renditions.

Most of us have listened to one of the famous songs Dil Hoom Hoom Kare from the film Rudaali. The doctor-turned IAS officer mellifluously sung the song as a tribute to the legendary singer-composer at the Demow Press Club, Sivasagar. The song is in Raga Bhoopali and has been composed by Hazarika, self-proclaimed jajabor (wanderer).

The female version of Dil Hoom Hoom Kare was sung by Lata Mangeshkar. The National-award winning film Rudaali was directed by Kalpana Lajmi. The Dimple Kapadia and Raj Babbar starring film was released in June 1993.

The newly appointed Deputy Commissioner was appreciated with loud applauds at the event. Later, a video of her performance was also shared on the official page of the Sivasagar district administration where netizens hailed the young bureaucrat for her singing skills.

On January 25th, 2019, President Ram Nath Kovind conferred the Bharat Ratna upon Hazarika. In his long illustrious career, Hazarika has donned many hats from being a music composer, singer, lyricist, actor, author, filmmaker.