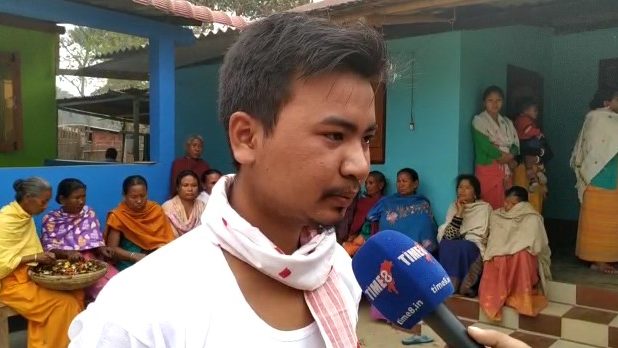 The son of slain CRPF jawan in Kolbari village in Tamulpur in Assam’s Baksa district has demanded that the armed forces should carry out surgical strikes in Pakistan in order to teach the neighbouring country a lesson for carrying out a cowardly attack in Pulwama on February 14th, 2019.

Speaking to TIME8, Dhananjay Basumatary, son of CRPF jawan Maneshwar Basumatary who got martyred in the terror attack said, “The sacrifice of my father and the other CRPF jawans should not go in vain. The government should instruct the armed forces to conduct a surgical strike again in Pakistan in order to teach the perpetrators a lesson.”

The body of the martyr Maneshwar, wrapped in the tri-colour, will reach Lokpriya Gopinath Bordoloi International Airport, Guwahati on February 16th, 2019. Assam Chief Minister Sarbananda Sonowal is likely to pay tribute to the martyr at the airport.  Sonowal has also announced an ex-gratia of Rs 20 lakh for Basumatary’s family.

A pall of gloom has descended in the entire region. “It is painful to lose a parent…no doubt we are proud of my father but the government should take measures so that another son or daughter doesn’t lose a father like mine. Modi ji should give a befitting reply to Pakistan,” he said.

It may be mentioned that Didwm Shree is pursuing a diploma in elementary education and Dhananjay is pursuing his graduation. Born on 1971, Maneshwar joined the CRPF in 1994.

The news of his martyrdom has shattered the family members, his friends and relatives. People from all walks of life have been making a beeline to his house since on February 14th, 2019 evening.

“We want justice. The perpetrators must be punished. They should carry out surgical strikes across the border,” said Kamal Boro, Maneshwar’s nephew while speaking to TIME8.

Basumatary would be accorded a state funeral. His mortal remains are scheduled to arrive at the LGBI Airport in Guwahati from Delhi on February 16th, 2019 and expected to reach his native village at around 2 pm.

“Modi ji must give a befitting reply to those responsible for Pulwama terror attack even if that means carrying out surgical strikes across the border, said Didwm Shree, daughter of martyred head-constable of the CRPF-98 Battalion Maneshwar.