‘You Will Be Fired Upon’: Army Appeals For Peace, Issues Warning To Anti-CAB Protestors In Dibrugarh 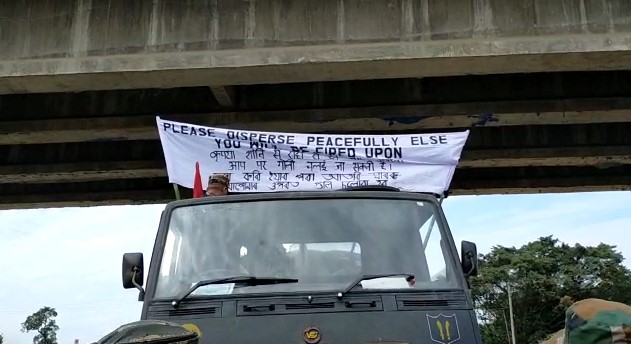 The Army has appealed for peace and issued warning to the protestors to withdraw their agitations against the Citizenship (Amendment) Bill, 2019 in Dibrugarh. A warning flag which read – Please disperse peacefully or else you will be fired upon – was spotted as protests escalate in the district.

Reports of violence were reported in Chowkidingee area in Dibrugarh on the morning of December 11th, 2019. Protestors burnt tyres and clashed with security personnel in the district.

Most of the business establishments remained closed as vehicles kept off the road on December 11th, 2019.

The Dibrugarh district administration has called QRT (Quick Response Team) to control the situation in various areas. As informed by the Deputy Commissioner, no curfew has been imposed in any area of the district so far.

A reporter of a local TV channel, Ratul Gohain and another girl injured in a protest incident at Bokul are undergoing treatment. The Deputy Commissioner has requested all to refrain from spreading rumours.

After getting nod from the Lok Sabha, the Bill was tabled by Union Home Minister Amit Shah on December 11th, 2019 in the Rajya Sabha amid strong protest by the opposition leaders.

The Bill seeks to grant citizenship to the people belonging to the Hindus, Jains, Christians, Sikhs, Buddhists, and Parsis who have become the victims of religious persecution in Pakistan, Bangladesh, and Afghanistan and entered India on or before December 31st, 2014.

However, the agitators said that the Bill nullifies the historic Assam Accord which has fixed March 24th, 1971 as the cut-off to identify illegal foreigners.

Security has been beefed up across the district with administration appealing for peace. The Assam Police has launched WhatsApp helpline number (9132699735) for complaints related to hate or fake messages related to the controversial Bill.